English shoes: Ten brands that are still made in Britain

English Shoes? Yes, there are some that are still made in Britain 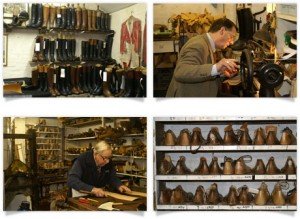 When I read that the British shoe company Clarks were thinking of bringing their manufacturing back to Britain, having made their last pair of shoes in the UK in 2005, it made me wonder which footwear you could buy these days that was still actually still made in England.

Here is my top ten list of English shoe brands that are still made in Britain, in order of the year that they started making shoes here:-

1. Horace Batten est. early 1800’s
Bespoke box calf leather riding boots are the Horace Batten bread and butter. This manufacturer is now in the hands of the 7th generation of the family, and the work is so labour intensive that even today less than 10 pairs a week are made.

2. Grenson est. 1866
Best known for their brogues with a Goodyear welted sole, this traditional men’s English footwear company recently paired up with Olivia Morris to make some fine shoes for women too.

3. Loake est. 1880
Still a family owned business, and based in Kettering, Northamptonshire. A handmade Loake shoe takes 8 weeks and 200 operations to make.

4. Barkers est. 1880
Barkers produce over 200,000 pairs of hand-lasted shoes a year from their manufacturing unit in Earls Barton in Northamptonshire.

5. Joseph Cheaney & Sons est. 1886
Proudly state on their website that they still hand construct every shoe they make, from the cutting of the leather to the final polishing. The Cheaney factory is in Desborough in the county of Northamptonshire.

6. Celtic Sheepskin est. 1973
As revealed in a previous post , these sheepskin boots were the original UGG and are still handmade in Newquay in Cornwall.

7. New Balance est. 1982
Originally a Boston based arch support company, New Balance started making some of their trainers in England in 1982. Today they make over 28,000 pairs a year in their factory in Flimby, Cumbria.

8. Daisy Roots est.1995
Many of the workers at Daisy Roots have joined from the ever-depleting shoe factories around Northampton and brought with them a wealth of experience. Their baby shoes are made from chrome and formaldehyde free leather.

9. Carre Ducker est. 2004
Deborah Carre and John Ducker, who met working for John Lobb, offer a bespoke shoe making service on the ground floor of Gieves and Hawkes. Keen to keep the fine art of British shoe-making alive, they hold several intensive shoe making courses throughout the year in London.

You may also want to read – English Shoes: 10 More Brands Made in Britain

Want to find more English shoes? Check out our directory

Do you know of any other footwear being manufactured in the British isles? Please leave a comment below if you do.