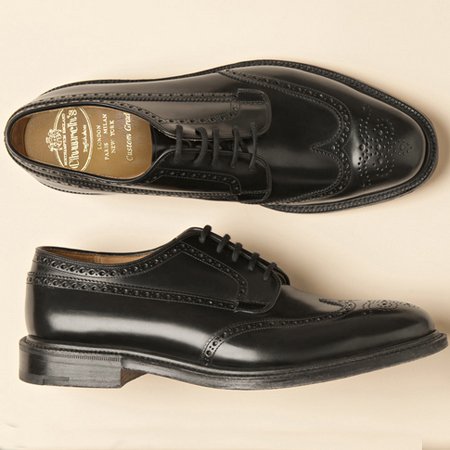 When we first compiled an article with a list of ten brands of English shoes that are still made in Britain we never could have believed how popular it was to become and the strength of feeling it would arouse in people. Since it was published in May 2011 the article has received over 70 comments from readers with suggestions, as well as outrage, for brands that had been left off the list, as well as arguments about which firms were genuinely making all of their shoes in the UK.

So to kick of 2013 we bring you a new list of an additional 10 brands that still make their shoes in Britain. In particular there has been a call for more women’s shoes to be found, so we have included a couple, but we are sad to say that there are very few English shoemakers specialising in ladies shoes in the UK these days.

There are still at least another 10 brands that we could have added, so watch out for a further article in the future, and as always, if you have suggestions for who has been left off the list then please leave a comment.

1. Tricker’s est. 1829
Known for their distinctive heavy brogues with a Goodyear welted sole, Tricker’s make 1400 pairs of (predominantly men’s) shoes  a week in their Northampton factory, 70% of which are sold to customers abroad. They are the holders of a Royal Warrant thanks to the fact that Prince Charles has been a loyal customer for over 20 years.

2. Church’s est. 1873
When we made our original list of British footwear brands Church’s were omitted because we were unsure of what percentage of their footwear was made here following the Prada take over in 1999, however we have it from several sources that all of their production is still done in their factory in Northampton, including their women’s range.

3. Crockett & Jones est. 1879
Crockett & Jones are another men’s footwear company producing Goodyear welted soul shoes. So important is their factory on Perry Street to the history of the shoe trade in Northampton that is was given a Grade II listed building status in 2004 in order to preserve the history of the shoe trade in the area. The do also carry a small women’s range.

4. Alfred Sargent est. 1899
Alfred Sargent founded his eponymous footwear label with his sons at the turn of the 19th Century in Rushden, Northamptonshire. The company continues to manufacture all of its footwear in Britain over one hundred years later and is now under the guidance of Alfred’s great great grandchildren. They produce 3000 pairs of shoes every week and the entire process is done in their UK factory.

5. George Cleverley est. 1958
The opposite of a mass-manufactured brand, George Cleverley make the majority of their shoes by hand in the upstairs of their shop in Mayfair, London. Their bespoke service allows the customer to create a pair of shoes of their own choosing with a made to measure fit – the ultimate in English footwear luxury.

6. Hotter Shoes est. 1959
Describing themselves as ‘stylish shoes with comfort built in’, Hotter Shoes have a huge factory in Skelmersdale, Lancashire. Producing over 1.3 million pairs of their casual shoes in the UK every year, we think this makes them the largest manufacturer of footwear in the UK – although we could be proved wrong.

7. Solovair est. 1959
Solovair (sole-of-air) is the brand name owned by NPS footwear manufacturers, who for 35 years produced boots under license,  sold under the name ‘Dr Martens by Solovair’. They continue to make the distinctive air cushioned sole boots, although now under their own brand name rather than under license. They also manufacture shoes for other customers, including ASOS and John Lewis.

8. Walsh est. 1961
Walsh is the only British-owned and manufactured sports footwear brand left in the UK. The company was founded by Norman Walsh in Bolton and is known for its distinctive and patented ripple sole, which was developed specifically for fell running. They produce the Walsh Sports and Walsh Casual ranges.

9. Jeffery West est. 1987
Having both grown up in Northampton,  Mark Jeffery and Guy West started their shoe business from the Jeffery family footwear factory in the famous shoe making town. Jeffery West don’t make the traditional toe-cap Oxford, or classic Brogue that Northampton is famous for, instead they opt for a much more individual style all of their own, whilst retaining the fantastic quality of craftsmanship that the area is famous for. (Note: not all of their shoes are made in the UK)

10. Yull est. 2011
Sarah Watkinson-Yull founded the Yull footwear brand having studied footwear at Philip Green’s Fashion Retail Academy. Whilst her main collection is not made in Britain, she has developed a special collection of shoes using UK manufacturers following funding that she received from the Prince’s Trust. Worth a mention here as Yull is one of the only independent shoe brands manufacturing ladies high heels in Britain.
[elegance-modal-box]