A visit to English Fine Cottons

Is Britain really going to be spinning cotton again? Yes it is! 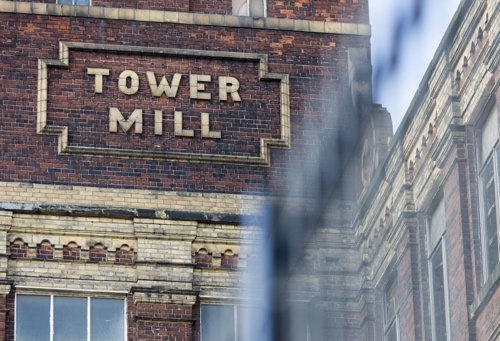 Tower Mill – where English Fine Cottons will operate from

It all started at our Meet the Manufacturer conference, apparently. Brendan McCormack, Steve Shaugnessy, and Andy Ogden, joint owners and general manager respectively, of Culimeta-Saveguard, came to the event to sound out the appetite for UK textile manufacturing. Their spinning plant in Manchester, which was making yarn from technical fibres such as Kevlar, had been receiving requests to spin cotton. At the same time, a disused premises named Tower Mill, over the road from the Culimeta Saveguard mill, came up for sale.

Having already received a grant to invest in new machinery for their technical textiles business, Brendan, Steve and Andy were aware that they might be able to apply for some more funds for a new cotton spinning venture, if they could put a robust enough case together. The inspiring talks at the conference, and the enthusiasm for reshoring textile manufacturing that they witnessed at the show, gave them the affirmation that they needed. The time was right for bringing cotton spinning back to the UK. And so began the launch of English Fine Cottons. 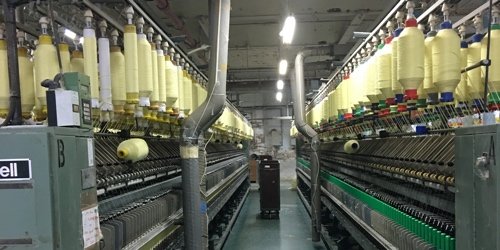 For the last two years the owners of Culimeta-Saveguard have been hatching their plan for bringing cotton spinning back to England. Visiting raw cotton suppliers, researching the latest spinning equipment and talking to weavers, knitters and brands in the UK that use a large amount of cotton yarn, all of which is currently imported.

One thing that Andy, Steve and Brendan were certain of after all this research, was that if they were going to start spinning cotton in England, it had to be of the highest quality. And for this they would need the finest raw materials and the most up to date machinery that money could buy. The set-up of this new state-of-the-art cotton spinning plant, which is based in Ashton-under-Lyne, just outside Manchester, is costing them nearly £6 million.

“Quality is sacrosanct to us”, Andy Ogden told me, when I visited the still-to-be-finished Tower Mill at the beginning of January. “English Fine Cottons will represent the top end of cotton yarn production. It’s going to be a brand new state of the art production plant, meaning that we will be well placed to compete on the global market”. 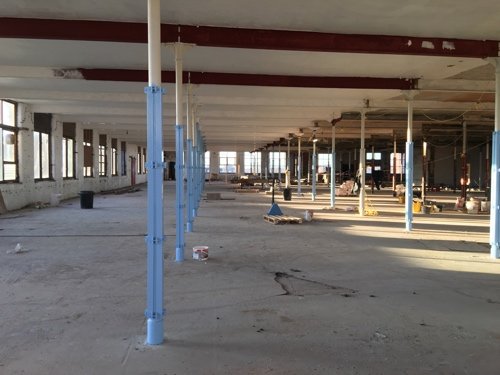 When Tower Mill is up and running again it will be the first cotton spinning plant in the UK for over 30 years. The mill is in an area rich in cotton history. At the turn of the Twentieth Century there were 9,000 people employed in the cotton industry in Ashton-under-Lyne, operating 2 million spindles*.

When I visited Tower Mill it was still an empty shell. The restoration of the 100,000sqft premises, which was last used for spinning cotton in 1955, is hampered slightly by the fact that the building is Grade I listed. Restoring this historic building means that no corners can be cut – and from the work I saw in progress, it is going to look amazing.  The machinery will arrive in April and spinning will begin shortly after. By the start of 2017 full production will commence and within five years English Fine Cottons are hoping to employ 130 people.

Spinning the yarn locally will be a major coup for UK textile production – shortening lead-times and helping brands to promote a totally British product from end to end. 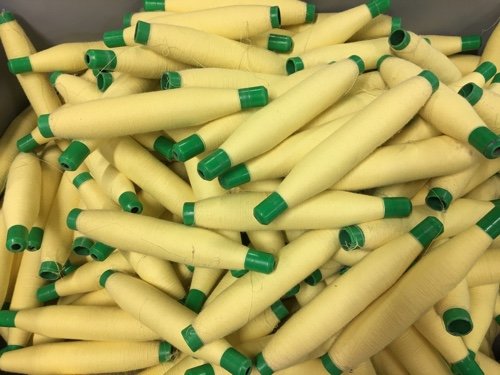 I have to admire the fact that Brendan and Andy are creating a brand new cotton spinning plant without compromise. Their vision for the future of the UK textile industry is commendable and will have a huge impact on the supply chain for British-made cotton goods. We will be watching their journey with great interest.

You will be able to hear more about the future of English Fine Cottons at our Meet the Manufacturer conference in May.

*For anyone interested in the history of  cotton in Asht0n-under-Lyne there is a great article here.