What more can the Government do to help small businesses manufacturing in the UK? 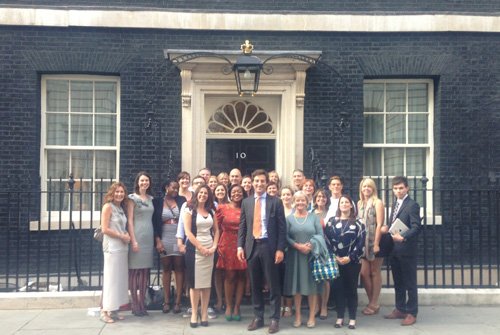 Yesterday I had the pleasure of being invited to 10 Downing Street to talk to Government advisors about what more they can do to assist small businesses in the UK.  The visit was organised by Emma Jones and her team at Enterprise Nation, who do some great work in helping to support start-ups, and are part of the team behind the fantastic Pop Up Britain retail stores. As well as myself there were representatives from platforms that sell products from designer/makers, such as Folksy and the Crafty Fox Market, as well as several small business owners, many of which manufacture their products in the UK.

Hosting the gathering in the rather grand State Dining Room were Daniel Korski, Enterprise Advisor to PM David Cameron, and Matthew Hancock, Minister responsible for small business and apprenticeships. Daniel and Matthew wanted to hear our thoughts on what the Government could be doing to help those businesses working in the craft sector, who between them generate £4.4billion to the UK economy.

There were some fantastic points raised about how the Government could better support the thousands of entrepreneurs that are helping to bolster our economy, in what is being hailed as the ‘March of the Makers’.
Here are some of the key points raised. Do you think that we missed anything?

It should be easier to find British manufacturers – Many business owners felt frustrated by the fact that when it came to making the step from designer maker to mass-manufacturer they had trouble locating the right people to make their products. Out of date directories, secrecy amongst their peers and factories unwilling to invest in unknown businesses were amongst the hurdles that the business owners had hit upon. A directory of British manufacturers is something that Make it British has been working on for a while, but should the government not also be doing something about this if they want to see these small businesses making the next step?

Access to affordable working space – Joe Smith from Makerversity, a shared space for making and learning in Somerset House, said that finding available space within central London, where many creatives are based, had been a very long and drawn out process. Whilst many agreed that manufacturing ‘hubs’ were a good solution to to expand their business and keep production in the UK, there was little help from the Government to set these spaces up.

The Government focuses on the ‘big guys’ when it comes to manufacturing, but the future growth will come from the small businesses. It appeared that many people felt that No.10 thought of engineering when it was referring to the march of the makers, and that craft-type businesses were considered less important. It was also evident that the Government needed a better way of classifying such businesses so that their contribution to the economy could be recognised.

The bank of mum and dad is one of the main sources of funding for start-ups and trying to get any money from the banks is a waste of time. Patricia van den Akker from The Design Trust raised the point that in Belgium there are tax breaks for family members that lend to small businesses, whilst in Britain they are penalised for it!

The HMRC tax system is a minefield, and dealing with National Insurance contributions and PAYE is even worse. Creative businesses want to spend their time creating, not doing paperwork or negotiating their way around the HMRC website.

Students are coming out of college unprepared for the real world. Whilst Britain has a great reputation for teaching design skills and encouraging creativity, many agreed that graduates were ill equipped with the business acumen that is required to turn a great idea into a successful company. The Government could address this by ensuring that business studies are an essential part of all creative courses.

Apprenticeships are a great way for small businesses to take on new staff. Jane Field from Johnny’s Sister could not rate her experience of apprentices highly enough, and encouraged everyone to consider taking on new team members under an apprenticeship scheme. There were certainly indications from the ministers that making it easier for companies to do so was something that was in the pipeline.

A Made in Britain marque would help identify those businesses that were supporting UK manufacturers. But will the Government ever condone this? It’s certainly something that has been raised in the House of Commons a couple of times before. Make it British strongly believes that a Made in Britain marque would be a huge step forward in helping to support and grow British manufacturing. Watch this space for an announcement on this shortly… 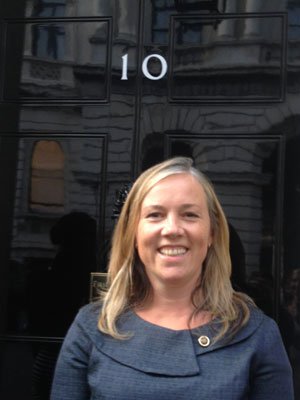 Kate Hills from Make it British outside No.10