Fake it British – the worst example yet?

High Street retailer is caught mis-labeling product as Made in England  – an attempt to confuse or a genuine mistake? 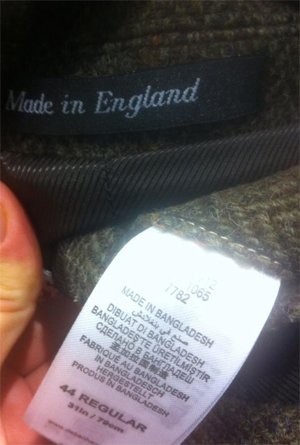 Recently I put a call out to our followers on Twitter for a research project that I am doing. I was looking for some good examples of products that the public might think were made in Britain, when they are actually made abroad. Some worrying cases came back, including the Royal Doulton bulldog with a Union Jack on its back, shown below, that was produced as a collectors item for the movie Skyfall, but was actually made in Indonesia.

But the most-shocking example was spotted by an eagle eyed chap called Dan Howarth. He sent us a photo he had taken of a men’s tweed jacket with a lovely made in England woven label sewn prominently into the back neck. However, when he looked inside he found a printed label that said that it was made in Bangladesh.

Was this a genuine mistake? Or an attempt to mislead the public into buying British? Were they referring to the fabric with the Made in England label? Maybe yes, but still not acceptable.

Now, having worked in the garment trade in the past I know how easy it could be for someone to type an incorrect code into an order form which can then cause the wrong labels to be sent to a factory. However, in this instance where the mis-labelled garment has actually made its way onto the shop floor, it would have meant that no one else spotted the error along the way – not the label manufacturer sending Made in Bangladesh labels to a UK factory, not the machinist stitching it into the garment, nor the person at the retailer’s head office who is supposed to check these things before it is allowed to go out to stores. 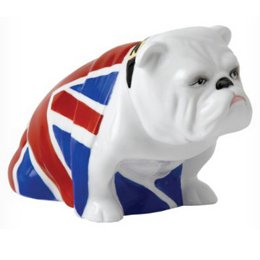 I won’t name and shame the retailer (although if you look very closely you can see their website address on the label at the very bottom of the picture), but I will say that they are a very well-known high street retailer that should have known better.

So what do you think? Is this an attempt to fool the public? or is it a genuine mistake? Or maybe it is now acceptable to label a garment as made in England, when in fact it’s not?

If you think that this sort of thing is wrong, please sign our petition for a standardised Made in Britain logo. The link is here on the HM Government website*.

*And don’t forget to follow the link in the confirmation email that they send you, otherwise your vote won’t count.