Old Aquascutum factory is reinvented as The Clothing Works 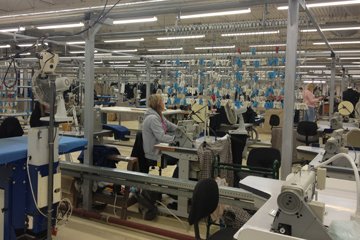 Last Friday I had the pleasure of being invited to the old Aquascutum factory in Corby, Northamptonshire; now open for business again under new owners, and re-inventing itself as one of the biggest CMT* units in Britain. Here is a how it went:

When the administrators were called into Aquascutum a year ago one of the first things that they did was close down the company’s UK manufacturing base in Corby. On the morning of Thursday 19th April 2012 over 100 highly skilled clothing workers were told that not only were they losing their jobs, but also that they would not be paid for the work that they had done that month. In fact I wrote an article at the time saying how short sighted I thought it was of the administrators to instantly discard one of the company’s biggest assets, especially given the increasing demand for UK clothing production.

When the business was subsequently sold to the Chinese they didn’t want the factory either, and so it was put up for sale separately, many thinking that the machinery would be sold off and shipped abroad. So it was marvellous to hear 3 months later that the entire factory and all of its contents had been bought by Swaine Adeney Brigg, the British luxury leathergoods company. Just a few weeks later, nearly 30 of the original staff walked back through the doors of the building; ready to start work on making clothing again. “It was like nothing had changed, and yet everything was different”, says Alison Gardener, now reinstated as production and technical supervisor. “I had worked for Aquascutum for 28 years, and like many it was all I had ever known. I did find work after I was laid off, but it was not in garment manufacturing”. Alison is now one of 35 staff back at work and ready to take on new challenges. 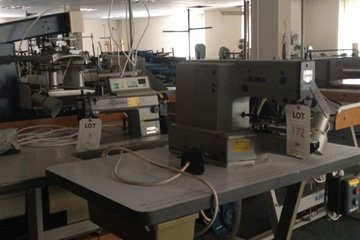 Now producing for other clients, as well as for Aquascutum, the new owners have renamed the factory The Clothing Works, and it is managed by Alistair Rowan, a former technical director for Jaeger, who knew the factory well, having spent three years there just before it closed when Aquascutum was owned by Jaeger. Alistair has been charged with breathing life back into the business, and that includes finding new clients in order to keep the machines buzzing and to be able to take back more of the original machinists. He invited me down to have a look, having been told of the work that I do helping find factories for designers to work with, and when I walked into the place last Friday I was gobsmacked by its sheer scale and potential. The production floor occupies 32,000 square feet, with machines as far as the eye can see, and is possibly one, if not THE, largest single-floor clothing manufacturing units in the country. Not only that, but the machinery and technology that the company has at its disposable is incredible, much of which is currently not even put to use.

As I take a walk around I meet many of the original Aquascutum staff – Sue Parker, a line supervisor who had worked for the business for 42 years, tells me that my visit coincides with the first anniversary of the very day that the administrators walked in and put an end to the career that she had had for over four decades. Sue, who had completed a computer course whilst taking a break from the garment industry, is glad to be back at a sewing machine, despite the fact that many of her former colleagues had not returned when the factory re-opened its doors – those that had found permanent work elsewhere had been reluctant to return to an industry whose future they considered uncertain. 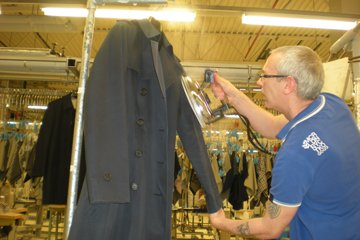 Stuart Robertson, one of the pressers reinstated at the factory

And yet, under its ownership of Swaine Adeney Brigg, and its re-invention as The Clothing Works, the future of the UK clothing manufacturer is looking pretty rosy. Now no longer just making garments for Aquascutum, Alistair Rowan and his team are speaking to lots of potential new customers who are keen to make their garments in the UK. And whilst the factory was originally solely a raincoat factory, they are now able to make a much wider range of garments, including soft tailoring, trousers, dresses and skirts.

Just as I was leaving the Corby-based factory after my two hour visit, I was fortunate to bump into Roger Gawn, Swaine Adeney Briggs’s chairman, and the man who had the foresight to snap up the factory and get it back up and running again. I shake his hand and commend him for saving this small part of British manufacturing history, and ask him why he decided to do (what many would consider) such a crazy thing?

“I have watched British manufacturing unfold for many years, starting with a local shoe factory in Norwich called Norvic, which was bought out in the ‘70s and asset stripped, with the subsequent loss of 2000 workers”, Roger tells me. “When I saw the opportunity to save the Aquascutum factory and put it back into British ownership, I jumped at the chance….something disappears when a company is not British-owned anymore, something intangible, but it does make a difference”. 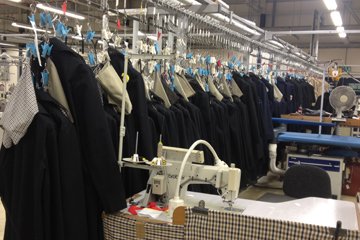 With that I leave The Clothing Works feeling pretty secure in the knowledge that I think Roger and Alistair will be able to fulfill their aim of getting the factory back up to full capacity again; and given the amount of people that contact me looking for British clothing manufacturers at the moment, I think that they will be able to do that in a very short space of time.

If you are interested in talking to The Clothing Works about garment manufacturing you can contact them here.

*The acronym CMT in the UK clothing manufacturing industry stands for Cut, Make and Trim – referring to the 3 processes that the factory carries out upon receipt of the fabric and trimmings with which to make the garment. 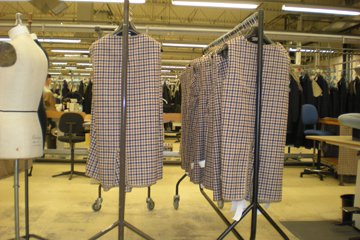