Last week I had the good fortune to be invited to Somerset to meet Deborah Meaden, best known for her appearances on TV show Dragon’s Den, and to hear all about how she is supporting a revival of the British manufacturing industry with her latest business venture, The Merchant Fox.

Two years ago Deborah, along with long standing friend and textile expert Douglas Cordeaux, bought the Fox Brothers‘ mill in Somerset, which had been making luxury woollen cloth in the West Country since 1772. Fox once employed nearly 5000 people, but before Deborah and Douglas took over the business there were only 18 workers left. Since then business is booming, and Fox has now begun employing  apprentices to work in its factory to learn the skills that could otherwise have been lost.

Realising that there was a gap in the market for luxury products that could compliment the wonderful cloths manufactured at the Fox Brothers’ mill, Deborah has recently launched The Merchant Fox, an online retailer selling luxury British goods, all beautifully made using some of the finest craftsmen left in the UK. 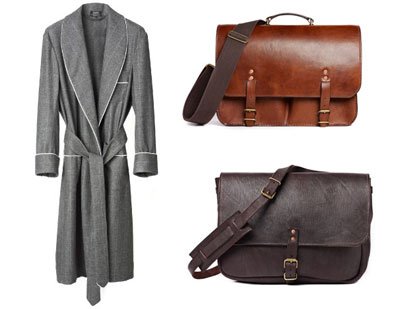 In the two hours that I spent chatting with Deborah, Douglas Cordeaux and Decca Lang, retail operations manager at The Merchant Fox, it was obvious that supporting British manufacturing is core to the values of their business and not just a short term marketing tactic.

Here is a summary of the exclusive interview with The Merchant Fox team:

What are your main reasons for supporting British manufacturing?

Deborah Meaden: We have a very good heritage and history of making things in this country. What we do well is something that is traditional, but presented in a very relevant, modern way.
I worry that if we go much longer (without supporting British manufacturing) we won’t be able to recover the skills we had and we’ll have lost something that we are really good at in Britain. I feel that the rest of the world thinks we’re better at what we do than we do. We walk around with our shoulders down saying  “we haven’t got any manufacturing anymore”, but Made in Britain really means something, particularly in other parts of the world.

Douglas Cordeaux: In China and Japan there is a huge appetite for British craftsmanship.

A lot of people are jumping on the Made in Britain band wagon, do you worry that the current focus on UK manufacturing will be a flash in the pan?

DM: I don’t think it can harm anybody getting that message out. I think the important thing is that it is genuinely and honestly made in Britain, because consumers are more knowledgeable and they are not going to have the wool pulled over their eyes. What would worry me is people claiming things were made here and spoiling it for everybody else. Just be honest and tell people what it is and what it isn’t.

DC: The British public just buy into the way a lot of brands market themselves – they assume it’s made here, which is a little bit naughty. However, I think a lot more brands would manufacture here if they could, the reason why they don’t is that they have been let down in the past.

Have you had any problems with any of the manufacturers that you are working with to make the Merchant Fox products?

Decca Lang: Not really, but the manufacturers that we work with are all small producers and we say ‘let’s just be honest, if you really can’t deliver just tell us, and we’ll work together and see what we can do’.

How do you think the clothing and textile industry can start attracting young people to work in manufacturing?

DM: There’s a short term and a long term fix. Short term there’s a lot of noise being made about apprenticeships…but it needs to translate into work, and they’ve got to enjoy that work. There’s a moment now where we can really change people’s perceptions but it’s got to be relevant and we’ve got to train them. Where are there shortages? Where is there a market that we’re really not working? And actually this market is one of them.
Long term we have got to get learning to make things back into schools. I’m an advocate for opting out of academia at fourteen too – if you’re better at doing something good with your hands, then do it.

How have you selected the manufacturers that you are working with for the Merchant Fox?

DC: Mainly through word of mouth, such as “have you heard about the chap in Colyton that’s doing the most amazing leather?”

DM: At the moment our manufacturers are quite South West based, but that wasn’t planned, it’s purely because we’re here.

DL: The silk printers are in Macclesfield and that’s a whole different area of the country that we haven’t yet explored, where there are just as many skilled crafts men.

DC: The furthest afield we have gone so far is Cumbria, working with Chapman bags.

Because the quality is of the utmost importance, how are you ensuring that you maintain that with your suppliers?

DC: You kind of know when you go in there. You can tell who is at the top of their game and you know by the other customers they are working with.

DL: We don’t screw them down on price either, that’s not what we are trying to do. It’s got to work for both of us, otherwise there’s no point in doing it.

Deborah, you’ve invested in Fox Brothers, which is a very British business, are there any more plans to invest in other British manufacturing businesses?

DM: If it’s the right thing, yes, because we need to be supporting British manufacturing! 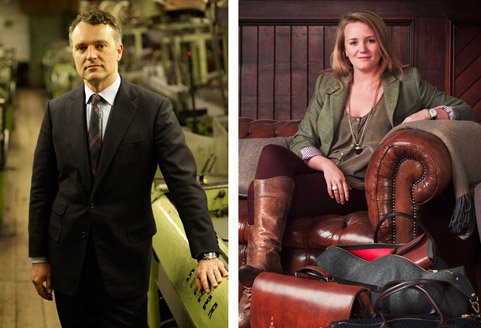 The Merchant Fox can be found online at www.TheMerchantFox.co.uk