A visit to Lancashire textile and leathergoods manufacturers Skip to content

A visit to Lancashire Manufacturers – Day One

There are more people employed in textiles in Lancashire than any other UK region, according to a recently published report. I decided to go and visit some of them… 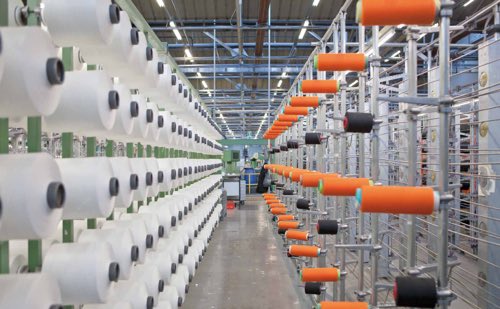 There are 11,000 people working in textile manufacturing in Lancashire according to a recent report

Last week I went to the launch of the Alliance Project Report at the House of Commons. The team at the Alliance Project have been examining the potential for large scale reshoring of textile, clothing and leathergoods manufacturing to the UK for the last few years, and the initial findings from their report were used to create a Regional Growth Fund  for textile manufacturing. This fund has enabled many manufacturers in Lancashire, Greater Manchester and West Yorkshire to benefit form millions of pounds of investment, helping them to buy new machinery, and put the great back into the Great British Textile Industry.

According to the Alliance Project report there are over 11,000 people employed in the manufacture of textile related products in Lancashire, making it the largest employer of workers of any region of the UK. For the purpose of the report the definition of ‘textiles’ included everything from spinning, weaving and knitting cloth, through to its dyeing and finishing, as well as the manufacture of soft furnishings, clothing, leathergoods, hosiery and footwear.

So I decided to take a trip up to Lancashire to meet some of the people involved in textile manufacturing in the region. I started off in the Rossendale Valley, once home to 50 footwear factories. What now remains of the shoe industry here is mainly importers of cheap from from abroad. One man determined to change that is Aaron Proctor. Born into a footwear family, Aaron’s dad Tommy started Pro Footwear from his front room in the seventies, and had 20 great years of making shoes in Lancashire. After pressure from retailers to lower his prices to compete with the Far East in the mid-nineties, Tommy decided to shut up shop, but had the foresight to put all of his machinery in storage, along with hundreds of shoe lasts (the moulds used to shape the shoes). Now his son Aaron is endeavouring to relaunch the business and once again make Rossendale the home of finely crafted women’s shoes. 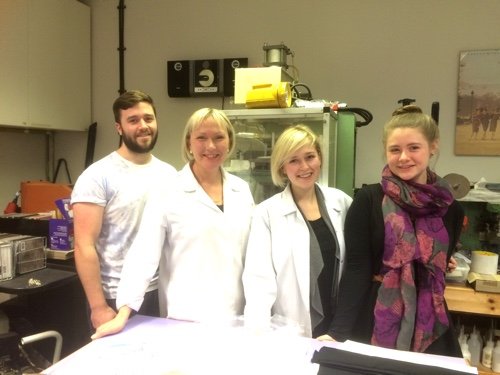 My next stop in the Rossendale valley was to Deni-Deni in Haslingdon, home to the workshop of bespoke leathergoods maker Denise Pearson. Having trained in the design and manufacture of leathergoods at Cordwainers college, back in the days when the course was very ‘hands-on’, Denise has the sort of leatherwork skills that are very rarely found in the UK today. There is nothing in leather that she cannot make, and her workshop is full to the brim with the tools of the trade. She is now passing on those skills to her son Aden, and daughter Hannah works in the business too. When I visited Denise she was busy getting handbags finished for London Fashion Week for the Top Shop Unique show.

Still on a leathergoods theme, my next visit was to Britannia Footwear in Burnley. Richard Swift, who set up the business, told me about the innovative new system that the firm has created for making shoes, which will allow them to manufacture footwear in the UK much more efficiently, and hence compete with overseas production. He is at the initial sampling stage with many high profile menswear brands, as well as developing Britannia’s own label. 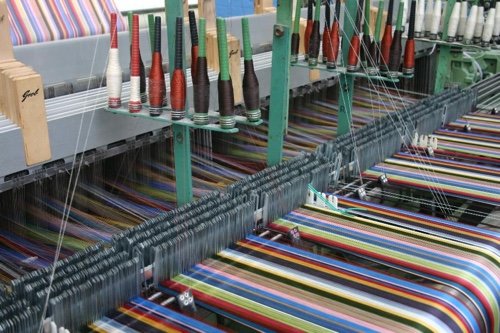 Up the road from Burnley, in the tiny village of Foulridge, just on the border with West Yorkshire, lies County Brook Mill, home to weavers Mitchell Interflex. Here I met with Lance Mitchell, great-great grandson of William Mitchell, who established the business in 1907. The original mill building was constructed in the 18th Century, and up until the 1960’s still used water from the adjacent river to power the weaving of cotton. These days Mitchell Interflex weave a broad variety of cloth, from high tenacity nylon, to circular cotton used to wrap cheese, to the interlinings for Hermès ties. In fact, there really aren’t many types of woven fabric that they can’t turn theirs hands to, and they even have a couple of shuttle looms that can still manufacture denim in the UK. One of their biggest customers is Wallace Sewell, who are known for their very vibrant patterned wool and cashmere scarves and throws. 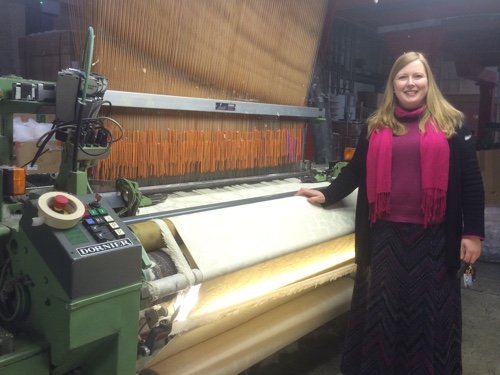 My final visit of the day was to S Dawes Weaving. Joanna Brockbank, the company’s design manager, showed me around the mill, which houses a dozen or so very busy jacquard looms, as well as four dobby machines. Joanna overseas the designs for such clients as John Lewis and Laura Ashley, and it is evident from the way that she talks about every single piece of cloth that she is very passionate about what she does. S Dawes Weaving moved to its current location in Colne a year ago. When you see the scale of some of the jacquard looms, you realise that the moving process must have been a mammoth task. But the business is now fully up and running in its new home and producing up to 30,000 metres of fabric a week for the homeware and garment industry.

As you can see, there is a broad diversity of Lancashire manufacturers working in the textile and leathergoods industry. Tomorrow I will report on six more that I visited on my trip.

Many of these manufacturers will be exhibiting at our Meet the Manufacturer trade show in June. Why not come and meet them?