Made in Britain :Britishness in the news this week Jul24 Skip to content

Made in Britain :Britishness in the news this week Jul24

From Britain with Love (DHL News)
“Nicky Sherwood, editor of FromBritainWithLove.com, argues that there’s never been a better time to export British…” 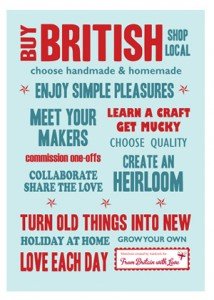 Mulberry’s billion pound bags (Telegraph Fashion)
“In addition to producing lust-worthy bags, Mulberry is now the world’s best-performing fashion house…Keen to maximise on demand for its leather goods, the brand is adding 50 members of staff to its factory in Chilcompton…”

Shoe firm with a Norwich sole celebrates milestone (Norwich Evening News)
“I think one of the main reasons Van Dal have lasted so long is commitment. We’ve remained committed to maintaining made in England as an attribute, and the family have a very strong commitment to the area…”

The Made in Britain logo, launched after a campaign by Stoves (as we discussed in a post last week), has received a lot of attention in the press. Some of the reactions can be seen here:

News Analysis: The Made in Britain Logo (Design Week)
“The Made in Britain identity project has certainly been a PR triumph for kitchen company Stoves…some observers, however, have questioned whether the resulting logo is a fitting marque for UK design and even whether such a logo is needed at all...”

The logo has also received quite a lot of attention on Twitter:

@oncewasengland A ‘Made in Britain’ logo should convey 1) ‘making’ 2) Britishness 3) excellence. This is poppycock!