A visit to Lancashire Manufacturers - Day Two Skip to content 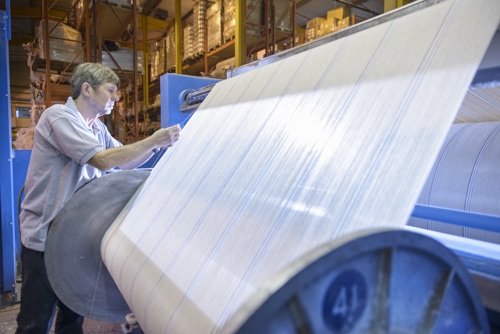 First stop on day two of my tour of Lancashire was Burnley, the home of cotton weaving. There was once 70,000 looms here and in the mid-1900s Burnley was the largest producer of cotton cloth in the world. Now there are just a couple of mills. 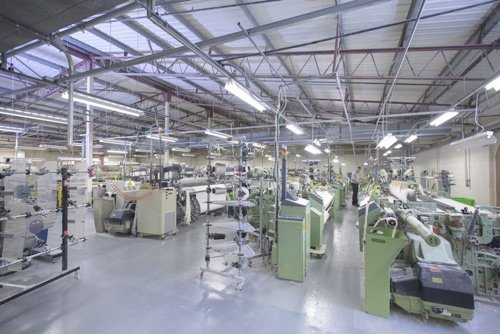 I visited John Spencer Textiles, one of these last remaining mills in Burnley, to meet David Collinge, owner and 6th generation descendent of the founder of the firm. The John Spencer mill is pretty impressive, and occupies a big site in the centre of the town. David tells me about the history of the mill, and how up until 1970 Marks and Spencer had a share in it – something that you couldn’t imagine happening these days. As well as weaving cloth for clients in the clothing and homewares industries, and technical textiles for the military, John Spencer also weave for their own Ian Mankin home textiles brand. Recent investment from the Regional Growth Fund has seen John Spencer Textiles increase the amount of looms in its mill from 18 to 30, including 2 new jacquard looms that are due to arrive any day, making them one of the largest weavers in the UK. 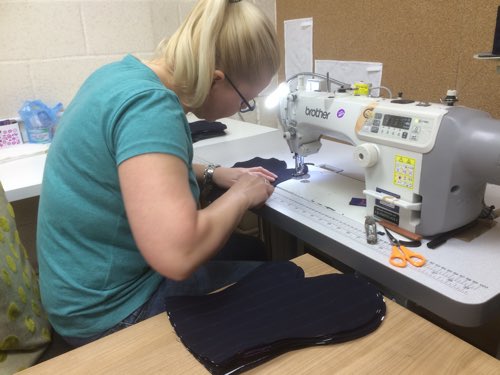 Just up the road from Burnley is Accrington, home to sewing factory Lantex. If ever you want to make a pair of oven gloves in the UK, this is the place to come. The ladies working here were producing oven gloves, aprons and tea towels at a rapid rate – probably some of the fastest machinists I’d ever seen! Lantex were also the company that kindly made all of our printed cotton canvas goodie bags for our Meet the Manufacturer event last year. 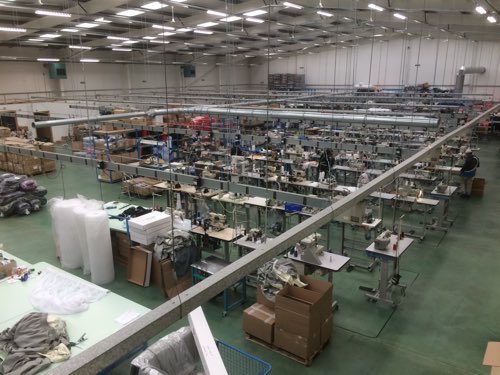 Next stop was Blackburn, and a visit to one of the most impressive factories that I have ever seen in the UK, Edward Taylor Textiles. Run by Ilyas Patel and his brother who, having been in the textile industry for years, decided to take a seven year break from manufacturing a decade ago, and instead turned their huge sewing factory into a storage unit for legal documents. Whilst the new use of the premises was more lucrative than sewing, Ilyas decided three years ago that he missed the textile industry too much. So armed with some new knowledge of modern manufacturing methods employed in other industries such as car making, Ilyas set about creating a sewing factory for the 21st Century. The methods which Edward Taylor employ to produce the sublimation-printed sportswear going through the factory, include all workers standing up at the machines to sew – something that I had not seen before. Alongside the sportswear, the company also produce curtains, something that you wouldn’t expect to see being made in the same place as football tops. But somehow, in this huge aircraft hanger sized space, it works. Well done to Ilyas and his team for creating such an impressive set up.

As if the textile products produced in this part of Lancashire could not get any more diverse, my next visit threw up a company making bullet-proof vests, including baking the ceramic plates that go into them. VGTec is run by husband and wife team Jason and Jodie, and I am amazed when they show me the giant oven that they use to make the plates for the bullet-proof vests. Alongside the body armour, VGTec make an interesting mix of sewn products, including dog beds, safety uniform and school dresses! 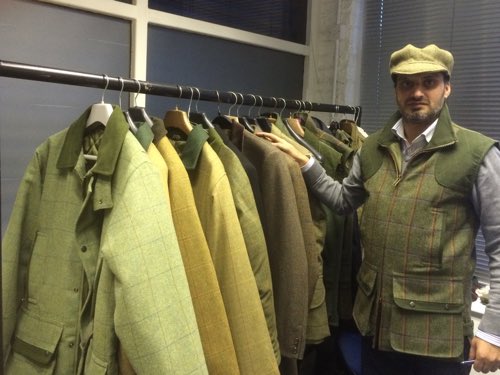 My next visit saw me heading south to Bolton, to meet with Javid at Woodbine & Bosworth. Describing himself as ‘the tailor’s tailor’, Javid is a specialist in countrywear and has a client list that includes a well-known Savile Row tailor. After showing me around his small sewing unit, Javid insists on calling his cousin Sohail, who owns a curtain factory up the road, to ask if I can visit there too. Despite the fact that it was nearly 6pm by now, and his cousin has had no notice at all, Sohail welcomes me into his enormous Victorian building, which is spread out over 3 floors. He shows me the curtains and blinds that Artisan Furnishings make for many of the High Street retailers, and amazingly much of the sewing on these giant pieces of fabric is done by hand. At that point the bell goes and it is time for everyone to clock off.

Six manufacturers covered in one day – exhausting but fun! Don’t forget to join me for Day Three of my journey when I am off to Manchester for the final leg of my trip.

Many of the Lancashire textile firms will be joining me at our Meet the Manufacturer event at Tobacco Dock on the 3rd & 4th June. If you would like to come and meet them visit www.meetthemanufacturer.co.uk for more information.