Why I left my corporate job to save UK manufacturing...and why I'll never go back - Make it British Skip to content

In 2008 I left my well-paid job as a fashion buyer with a mission to do something about the decline in UK manufacturing. I reflect on my former career and how far I’ve come in the last few years. 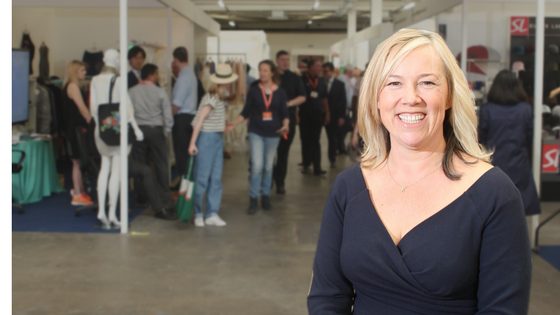 At our Meet the Manufacturer trade show in 2017

In 2008 I had what many would consider a dream job. In one year I had travelled to Hong Kong, China, India, Brazil, San Tropez and Los Angeles developing products for the large high street retailer that I worked for.
Yet life was tough.
I had a three year old daughter that I never saw, a team that kept leaving because they weren’t paid enough, and an unsupportive boss who refused my request to reduce my hours to a nine day fortnight. What’s more I was told to drop the last of my ‘local’ suppliers ( a swimwear supplier in Portugal) because their cost prices were higher than those from China.
To top it all off my mum passed away that year too.

Handing my notice in without a plan

Life was suddenly looking very short…and I knew that I didn’t want to be beholden to someone else’s strategy any more. I wanted to spend more time with my family. I also had this inkling at the back of my mind that local manufacturing was going to come back again, and I wanted to be at the forefront of it.
I hadn’t decided HOW I was going to save UK manufacturing, but I had three months notice in which to hatch a plan.
So I walked into my boss’s office and handed my notice in…and I’ve never looked back!

Starting the Make it British blog

It took me 3 years to get Make it British off the ground. In that time I had another baby (an unplanned surprise!), got myself a masters degree (one can never stop learning) and nearly started a handbag brand with a crazy American lady I met on the internet (that was a close call).
In that time I was researching and visiting UK factories and going through several ideas for how I could make some sort of business out of what I was discovering.
At one point the idea was to set up an Amazon-style marketplace for British-made goods. But I soon realised that I was going to have to sink my life savings into getting that one off the ground (this was in the days before you could buy the software to build such a platform off the shelf).
So instead I launched a little blog called ‘Make it British’ and started to write about all of the great brands and UK manufacturers that I was discovering.
That was February 2011.

By January 2013 I was appearing on the BBC talking about buying British.
In June 2014 I had launched a trade show so that UK fashion and textile manufacturers could meet buyers and designers wanting to make in Britain again.
In May 2017 that same trade show welcomed 5,000 visitors through the door.
Now not a week goes by that I don’t get a UK manufacturer or British-made brand thanking me for the support that we give their businesses.

Could I have predicted all of this when I decided to leave my job at the end of 2008? No.
Am I making as much money as I was in my previous career? Definitely not!
But I’m a ton happier 😃
I get to spend more time with my kids and doing the things that I love, and life is so much more rewarding.

My advice to you

So my advice to you if you’re thinking of a career change is just got for it!! Especially if it’s something to do with making in the UK.

In fact, if it involves making in the UK, we can definitely help you.
At the beginning of next year we’ll be announcing lots of new resources that we’re working on which will help you to launch a British-made brand.