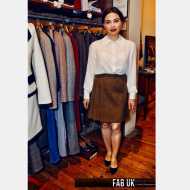 Moda de la Maria
Clothing & Accessories
Moda de la Maria was founded in London in 2019 by Maria Ruseva, a Moldovan-born designer who has been working in the fashion industry for over fifteen years. Her experience with modern disposable fashion led her to look for alternatives that were both organic and sustainable. Nothing she found suited her sense of style, and so this led Maria to set up her own company. Her passion is to create pieces that take a fresh and contemporary look at classic styles. She wanted to create clothing which combined couture styling with natural fabrics, for women who wanted to stand-out from the crowd. Like her fabrics, her inspirations come from nature and from her travels. Having moved from Moldova to Istanbul in 2004, she spent nine years working in both fashion design and quality control. This gave her a deep understanding of the operational heart of the fashion industry, and of how to produce the best quality clothing. She settled in London in 2013, and continued to expand her knowledge and experience, including working on both the hand stitching and finishing off couture pieces. This combination of techniques and life experience has led her to combine bold patterns and almost architectural motifs within her own designs, but moderating them with softer background colours, emulating the rich variety of colours in a spring meadow. Each piece is painstakingly designed by Maria in her workshop in South-East London. There, working alongside a small, carefully selected group of craftsmen, she draws the concept art and look of each piece by hand. She then uses traditional hand techniques to produce the pattern for each piece, before cutting the carefully-sourced materials, making sure that each element meets her rigorous standards. They are then stitched together by hand, using traditional tailoring and hand-finishing techniques, to create unique pieces with a robust construction that will look good no matter where you wear them. They can be worn either as outfits, or used as signature pieces to style around and enhance your wardrobe, producing practical, sustainable fashion that you can love and use for years to come. Every piece Maria sells is produced by hand to meet her client’s requirements, ensuring the highest attention to detail and fit, and also allowing for a level of personalisation should it be desired. At the heart of her collections are a series of permanent pieces, designed to be wearable year round. These include blouses, trousers, skirts and dresses, all crafted from high-quality natural silk, and in deceptively simple designs. Each is executed in soft, pastel colours, and they are finished with carefully selected buttons or fastenings made from natural materials. Every item is designed to complement her clients’ figures, and can be used to create their own stand-alone wardrobe, as well as harmonising perfectly with her seasonal pieces.
This user account status is Approved

For her initial autumn/winter collection, Maria used tweed as the starting fabric for her designs. These are the highest quality, sourced from independent weavers based on the Isle of Mull, whose flocks are cared for in the most ethical and organic manner possible. They use traditional techniques to produce beautiful yarns that are either naturally coloured or dyed using organic colourings such as woad. These are then woven on Victorian looms into the tweed itself, and the results are fabrics which are closely connected to the landscape that created them. These inspired Maria, and her designs reflected those natural colours. The weavers also use patterns which are rarely seen in mass-produced tweed pieces; giving the fabrics they create very different appearances, setting them apart visually as well as in their feel. Carefully paired with organic silks in soft pastel colours, as accent colours and trimming as well as the lining, the overall effect is to create a collection which was quite literally drawn from nature, in every sense of the term.
Her spring/summer collection was again inspired by the countryside, but with elements of nostalgia, drawing on childhood memories of life in the countryside of Moldova, as well as her wider experiences of nature. As the focal point of her designs, she selected the poppy; a flower which seemed to be symbolic of many aspects of modern life. This bright and beautiful flower appears so fragile, but is capable of not only surviving but flourishing in the harshest of conditions. This became even more appropriate in March this year, where the world was changed beyond imagination, and lockdown seemed to bring to an end many of the pleasures which we had previously enjoyed. The poppy is a symbol of endurance in the most difficult of times, even when there is no end in sight, and a reminder that beauty can still be found there.
Maria drew the poppies herself, and this was then printed onto cotton.

Her upcoming collection continues to combine tweeds with silk accents, producing classic pieces with a playful edge that stand out in any situation. In particular, she has played with detachable silk collars, which can be worn underneath the jackets’ tweed collars to provide an additional colour contrast to the tweed, and to complement the other elements of the outfit to create a bold effect. These can also be purchased separately, with beaded edging, to be worn on top of dresses, tops, blouses or jumpers to accentuate outfits and achieve the desired look. She has also expanded her offering with a range of silk dresses, designed to be wearable at any event, including special occasions, such as weddings. They are conservatively but fashionably styled, so as to create the right sort of impact in any setting. These can also be accessorised with a range of silk scarves in three colours, printed with bold polka dot patterns which are designed to be equally versatile, adding the final flourish to any outfit.

All our products are made in England.

We are using only natural fabrics like wool, silks, cottons.

All products Made in the UK
Cruelty Free, Organic, Carbon Neutral
OFFERS