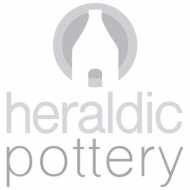 Heraldic Pottery
Heraldic Pottery is the UK's first choice in the Manufacturing, Design and Printing of Promotional and Commemorative Pottery. They specialise in Hotelware, Mail Order Ceramics, Ceramics for Retail Trade, Contract Decorating, Glassware, Art Tile, Ceramic Silk Screen Printing and Digital Printing. Their experienced and dedicated staff can guide you through the whole process of your order, from start to finish with limited fuss, from their 20,000 square foot manufacturing unit in the heart of the Ceramic Industry in Stoke-on-Trent.
This user account status is Approved
About About
Comments Comments

Heraldic Pottery was formed in 1998 by the 2 current Directors Andrew Tooth and Jason Simms, friends from football who were both working within the ceramics industry frustrated by the lack of opportunities to forward their careers.

It was decided after many drunken nights of talking about business and potential opportunities that they would give the idea of running their own business a go, this was pushed along further with Andy losing his job because of a sharp downturn in the UK ceramics industry due to cheap Chinese imports.

A couple of local wholesalers started to give Heraldic some regular decorating orders and a financial loan from friends and family allowed Andy and Jason to purchase their first kiln and rent their first property a 600 square foot unit at Imex Business Park. Using a couple of lithographers in their spare time more and more decorating work came along and with a quick turnaround and an eye for quality the infrastructure of the business started to blossom. A few promotional and commemorative orders were produced and it was decided that rather than paying out to other transfer manufacturers for the decals, that Andy and Jason would have a go at printing their own transfers. With help from a couple of friends and contacts within the ceramics industry, their first-hand printing table was made from an old school desk that they drilled holes in for a vacuum top with an old hoover taped underneath acting as a suction to hold the paper down for printing, two G clamps were used to hold the screen to the table. The screens were made and washed out with a hosepipe outside the buildings drain pipe grid and there was the start of Heraldic Pottery's printing service. Many late nights printing, making mistakes and continually learning the side of the decal began to pay dividends and a few local pottery decorators began to order transfers from Heraldic.

All manufactured in Stoke-on-Trent.