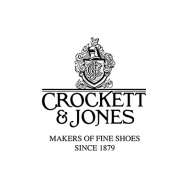 Crockett & Jones
Clothing & Accessories
Crockett & Jones was founded in 1879 in Northampton by Charles Jones and his brother-in-law, James Crockett, with a grant of £100 each from the Thomas White Trust ‘to encourage young men of good character in the towns of Northampton and Coventry to set up business on their own.
This user account status is Approved
About About
Comments Comments

Crockett & Jones was founded in 1879 in Northampton by Charles Jones and his brother-in-law, James Crockett, with a grant of £100 each from the Thomas White Trust ‘to encourage young men of good character in the towns of Northampton and Coventry to set up business on their own’.

The business was successful and expanded rapidly with more and more work being done inside the factory rather than at outworkers’ homes. In the 1890’s the 2nd generation (Harry Crockett and Frank Jones) began to integrate new machinery invented by Charles Goodyear from the USA for stitching the uppers, welts and soles together. This made the process much easier and faster, and gave rise to the name for the superior construction process that we continue to use today, called ‘Goodyear welted’.

Towards the turn of the century Sir James Crockett and Charles Jones recognised the need to find a larger factory for continued growth of the business and in 1897 they bought a new building in Perry Street, where we remain today. In 1910 a 5 storey wing was added to this factory, which was the first all-steel structured building in Northampton and boasted a huge proportion of glass to give superb natural lighting for production – an attribute which still benefits the workforce.

Now after more than 139 years and in its 5th generation as a family business, Crockett & Jones continues to produce shoes with the same attention to detail, quality, comfort and durability that was the hallmark of their founders, Sir James Crockett and Charles Jones.

In April 2017, Crockett & Jones was proudly awarded a Royal Warrant by HRH The Prince of Wales.

Crockett & Jones has been manufacturing shoes in its very own factory in Northampton, England since 1879 and although the production process has evolved since the early days of shoemaking, much of the factory looks just as it did when it was first built. The manufacture of high quality Goodyear welted shoes remains very labour-intensive, requiring a highly skilled workforce to carry out more than 200 separate operations during an 8 week period. This method, originated by hand-makers centuries ago, gives the shoes an exceptional degree of strength, durability and comfort in wear. The Goodyear welted process spans several production departments, each necessitating a multitude of different skills and experiences to ensure the shoes are completed to our exacting standards. Many of the operations, relying on excellent hand-eye co-ordination, take years to learn and a lifetime to master.

All components are manufactured at the Crockett & Jones Factory in Northampton. Materials and grindery that Crockett & Jones use during the production process are mainly sourced from the UK and Europe, with some specialist leathers coming from the USA.

All products Made in the UK
OFFERS
CATEGORIES
Clothing & Accessories
Shoes
PRODUCTS
Formal Shoes
IS THIS YOUR COMPANY?

Claim this listing to add further details to your profile.