028 - Retailers Under Fire for UK Sourcing Practices Skip to content 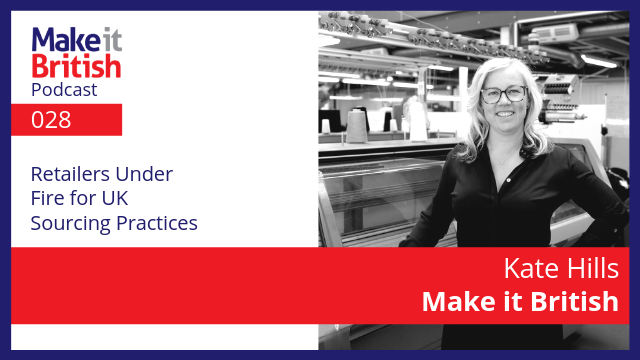 Listen to this episode of the Make it British Podcast (18:54)
0.75x
1x
1.25x
1.5x
2x
0:00
18:54
Apple PodcastsStitcherSpotifyTune-inListen in a New WindowGoogle PodcastsShare Leave a ReviewDownloadSoundCloudSubscribe on AndroidSubscribe via RSSSpotifyPlayer Embed
Powered by the Simple Podcast Press Player

Last week the UK Government released its interim report into the sustainability of the fashion industry. One of the issues that they addressed was concerns over fast fashion and how it might be leading to poor working conditions in UK garment factories where workers were being paid below the minimum wage and why this was happening.

In particular the finger was being pointed at Leicester, where there are over 700 textile companies predominantly manufacturing for the UK fashion retailers.

Fifteen of the biggest UK fashion retailers were called in to give evidence, including ASOS, M&S, Primark, Boohoo and MissGuided.

Many of these retailers manufacture in the garment factories in Leicester in order to deliver ‘fast fashion’ i.e. product that can be made to reach the customer in the shortest possible space of time.

In this episode I give my thoughts on the interim report, and suggest ways that some of the issues could be addressed.

A written article about this can also be found here : Government interim report into the sustainability of UK fashion industry – where were the manufacturers?

Want to find out how your business can benefit from being at the show? Apply here