How valuable is a Made in Britain label to your brand? Skip to content

How valuable is a Made in Britain label to your brand?

Do you ever wonder what consumers think about a made in Britain label? Does it carry enough sway to encourage people to purchase? We look at the research and come to some conclusions… 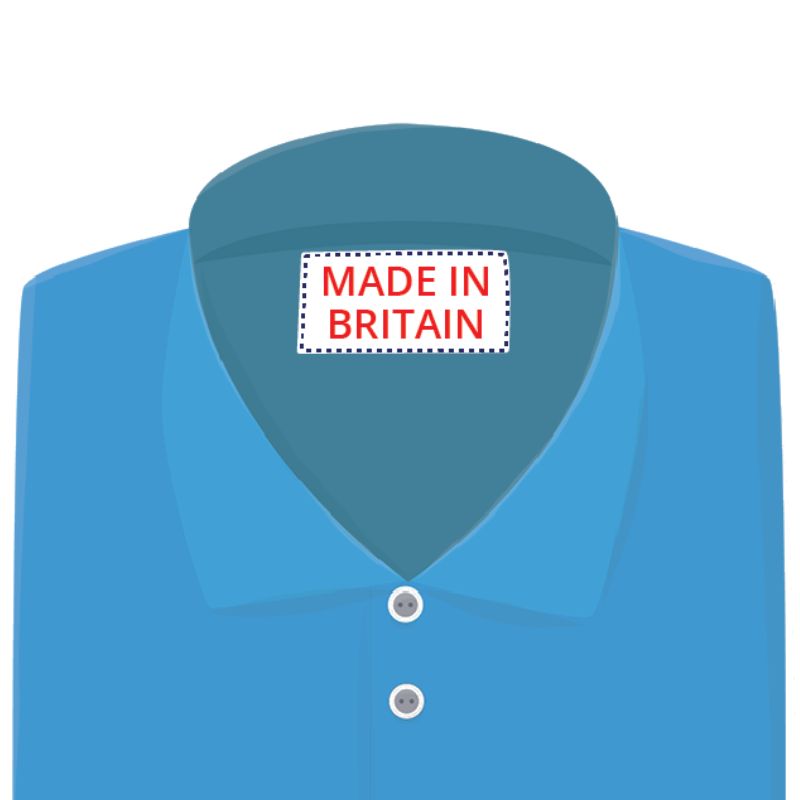 There have been several reports published over the last few years that have looked into the value of a made in Britain label to UK and international customers.

A notable study was a global survey carried out by Statista in 2017. The survey asked buyers worldwide to rank countries according to the perceived strength of their country of origin and the UK was the 3rd highest ranked individual country for it’s ‘made in UK’ label. Only Germany and Switzerland came higher, whilst the ‘EU’ as a conglomeration of countries came in third (which is bizarre considering you don’t often see anything labelled as made in EU!)

Similarly, research commissioned by Barclays and undertaken by Opinium in 2018 was equally positive.

They surveyed 8,060 consumers across eight international markets – France, Germany, Republic of Ireland, USA, China, India, the United Arab Emirates and South Africa – to find out the average price differential they are willing to pay for British products. The results were very positive.

The Barclays Made in Britain report found that consumers consider provenance an important influence on their decision to purchase products. British goods in particular are perceived as high-quality, reliable, internationally respected, and good value for money.

“The picture continues to look positive for Britain’s exporters, with international consumers going out of their way to buy British. Our research shows that some of the biggest opportunities lie in emerging markets, where British craftsmanship is most valued. The prize is substantial, and exporters should be looking to highlight the provenance of British products to take best advantage.” – Baihas Baghdadi, Global Head of Trade & Working Capital at Barclays

It has been calculated that an additional £3.45 billion could be generated in revenue if companies focused their marketing around the provenance of British products.

Demand for British-made goods is increasing 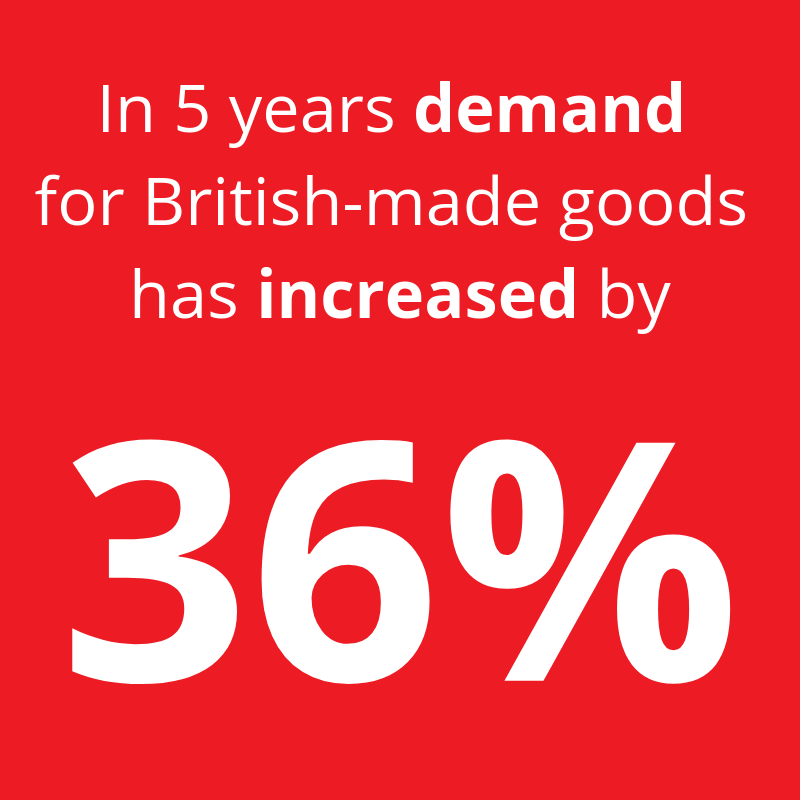 Barclays reported that goods manufactured in the UK are so popular that half  of international shoppers would hold out for a British-made product, rather than buy an non-British item, while one in nine believe that UK-made goods are the best in the world.

Overall foreign demand for British-made products is on the up – a third of people in the Barclays global study said they are buying more British products than they were five years ago.

The Union Flag is a big pull for customers, with 39% of international consumers being more inclined to buy a product if it displayed the Union Jack.

The appeal of the Union Flag is not only felt abroad, it’s being demonstrated here.  The younger British market is especially drawn to the Union Flag, with nearly half of 18 to 34 year olds saying the inclusion of a British flag on a product would encourage them to purchase it.

Barclays reported that goods manufactured in the UK are so popular that half  of international shoppers would hold out for a British-made product, rather than buy an non-British item, while one in nine believe that UK-made goods are the best in the world.

Overall foreign demand for British-made products is on the up – a third of people in the Barclays global study said they are buying more British products than they were five years ago. 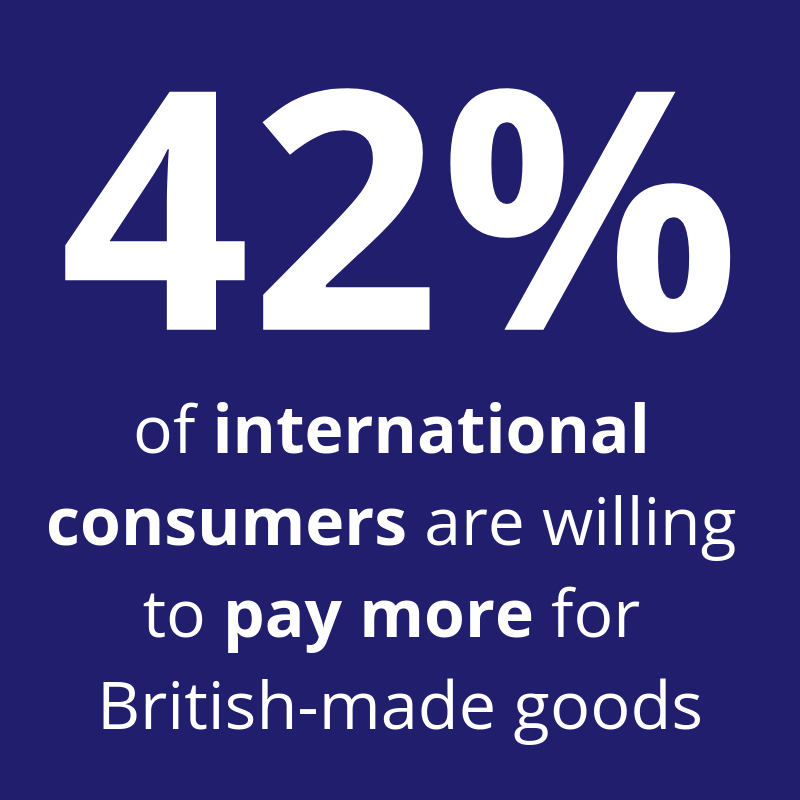 According to research from both Make it British and Barclays it would appear that customers at home and abroad are prepared to pay a premium for UK manufactured goods. 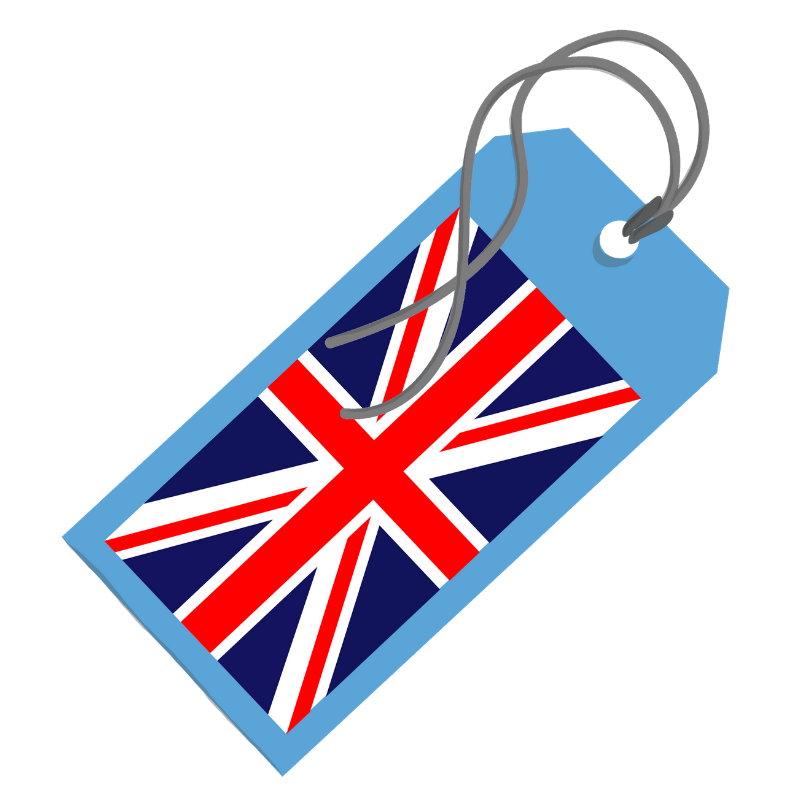 You can’t deny from the research the appeal of a product carrying a made in Britain label. But is a Union Jack flag enough?

There’s no doubt that you should use the provenance of your British-made products as part of your marketing strategy. But beware, anyone can put a Union Jack on a product to try and cash in on value of British goods.

With so many companies trying to ‘Fake it British‘ by plastering our distinctive flag on their products, UK manufacturers and British-made brands need to find ways to market the authentic provenance of their brand to be able to stand out in the crowded marketplace.

Tell the story of your brand and show behind the scenes to display the provenance of your British-made product.

The Made in Britain label has value at home and overseas for a reason – the perception of quality has been formed over years of producing exceptional goods using fine craftsmanship and materials.

Do you want to learn how to promote your made in Britain business?  Find out about the Make it British Forum, a one day conference to provide you with the knowledge and expertise you need to successfully promote and sell a brand that is made in Britain.

What do shoppers really think about buying British-made products?