The David Watson collection is a collaboration with local artists to create silk scarves and accessories with quintessentially British scenes. We introduce you to some of the artists and their designs… 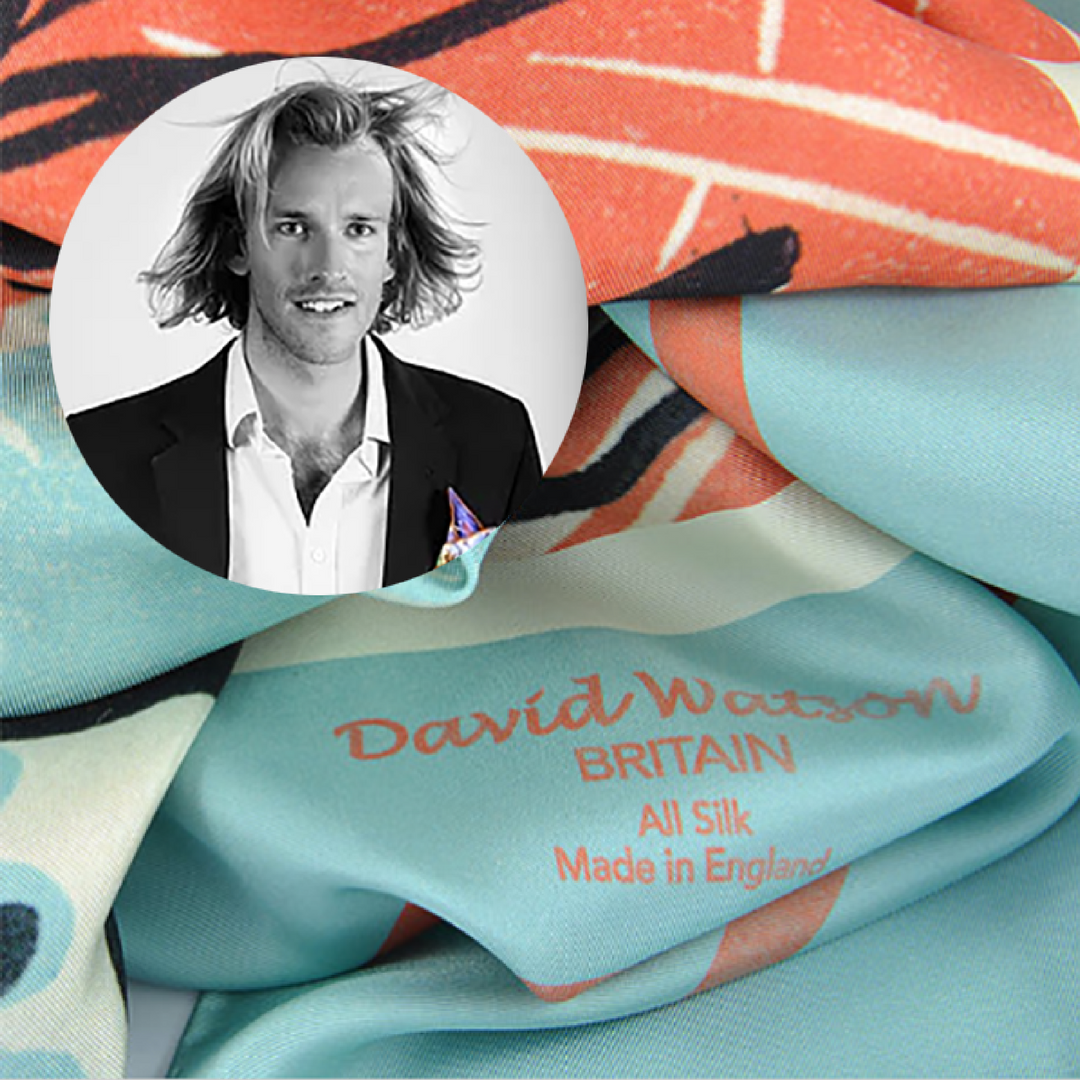 After stumbling into his dream job as a cameraman travelling around the world filming sailing, Samuel Petty decided to pursue a second dream to start his own fashion brand – David Watson.

Founded to combine Samuel’s love for art and passion for fashion, the brand uses silk scarves and pocket squares as blank canvases to share his favourite British art.  Each design shows a quintessentially British scene in the style of the individual artist.

“It’s great working with artists and sharing their stories. I like lots of different styles and the designs in my range are a personal selection of the art I enjoy. Artists generally love the concept of seeing their artwork in a different light, having your art flowing on a scarf is a completely different game to seeing it hanging on a wall.”

Samuel sources high grade Chinese and Indian silk through a London silk merchant for his products. The designs are digitally printed by UK factories allowing for collaborations with artists using any medium.  The silk scarves and pocket squares are then finished with quality hand rolled hems by artisan seamstresses across the country.

We take a closer look at some the silk scarves on offer from David Watson and the artists who produced the designs. 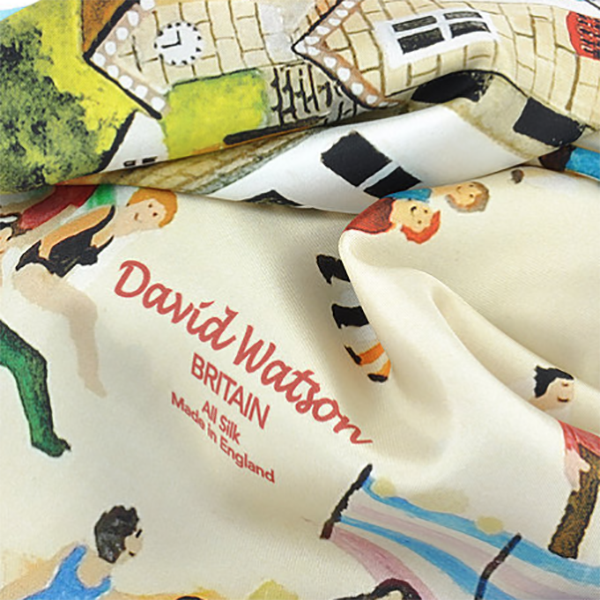 The Mousehole by Judy Joel

Judy Joel lives just behind the Mousehole News store in Cornwall. She enjoys being part of the village and never tires of painting the village and people. She always paints her mother with her black dog in her paintings and often other members of her family! She paints the background first, then she paints the people naked, and then she adds their clothes. Sometimes you’ll even find a person who is “undressed!” 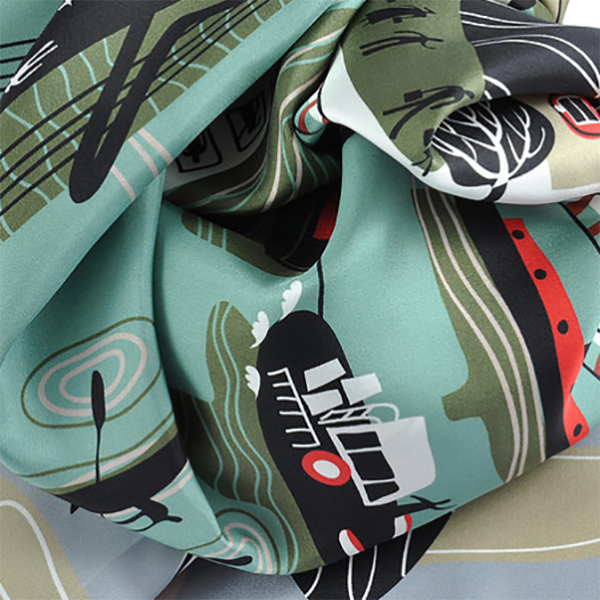 Melvyn Evans studied at Exeter College and the Royal College of Art becoming a professional artist in 1992. His work focuses on capturing the essence of the British countryside. This design shows the tides of people that use the bridges and the paths along the River Thames. It captures the spirit that exists from quieter stretches with willows, swans and rowers to the excitement of jugglers and performers along the Thames path. Melvyn draws with charcoal and breaks the space into areas of grey, black and leaving the white, this is then translated onto his distinctive linocut prints. 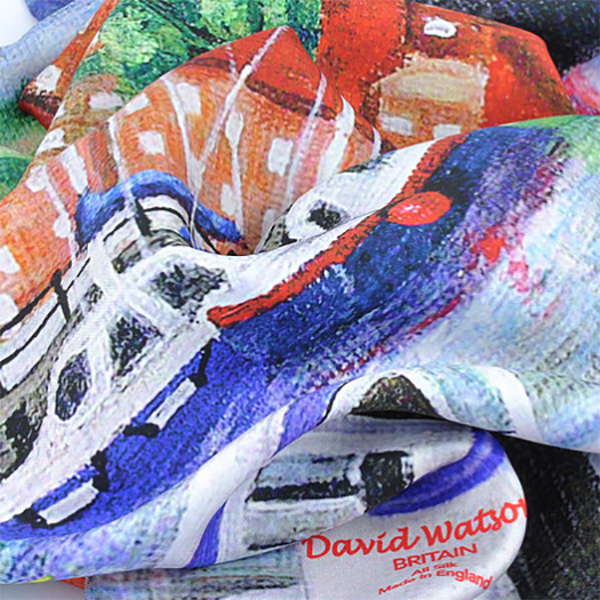 Ronald Haber is a plein air painter and works in many different mediums. He initially studied photography and painting at art college, went on to become a photojournalist for a local newspaper and later opened an art gallery. Ronald went touring with his wife along the Yorkshire coastline and was fascinated by the Robin Hood’s bay reflections and the vibrant red roofs set against the atmospheric Whitby Abbey. 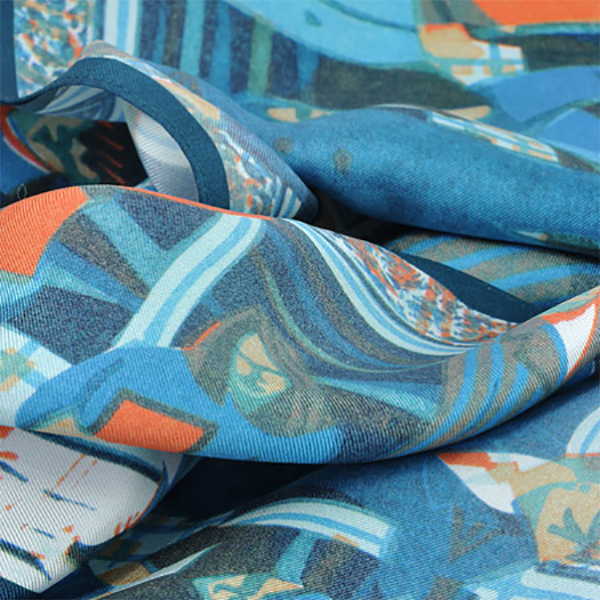 Paul Cleden grew up in London, studied illustration at Kingston University and in 1995 he moved to Dorset with his family.
This design shows people waiting in London for their transport. Paul is fascinated by the insular way people travel, whenever he sees a crowd his sketchbook twitches! Every linocut print is hand pulled by Paul using his 150 year old press, taking several months to develop, cut and print. 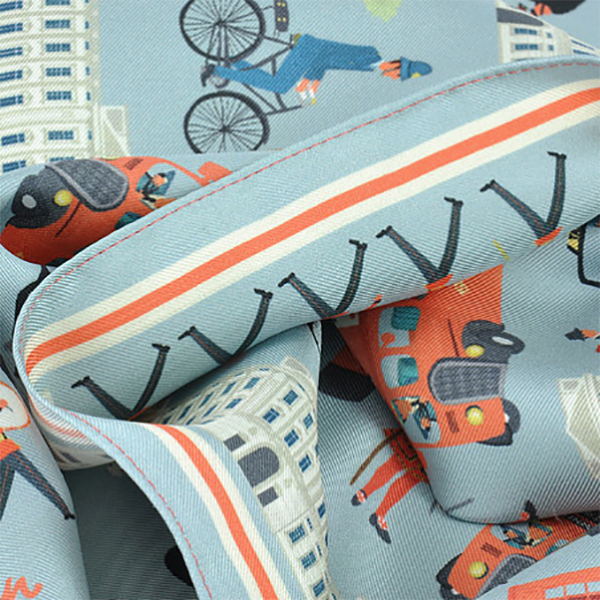 Clare Phillips focuses on the playful and imaginative and likes to create miniature worlds that convey a sense of optimism in her illustrations. This design is inspired by old London underground posters and vintage children’s books showing many iconic London scenes including red telephone boxes and Buckingham Palace. 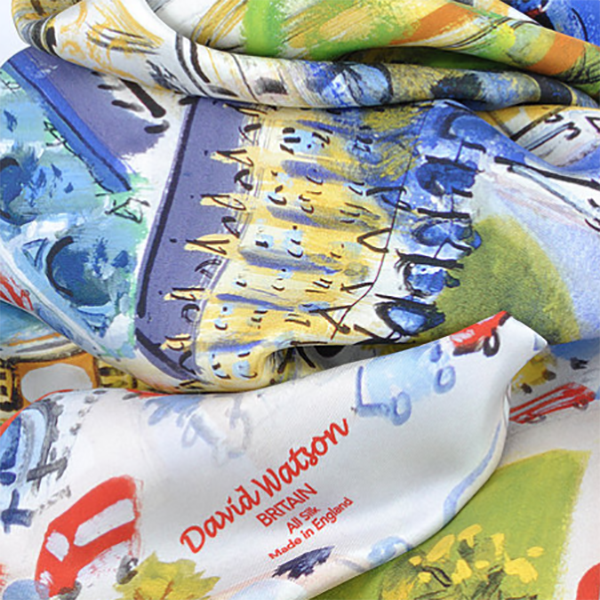 Ian Weatherhead was brought up in Yorkshire, went to school in Scotland and qualified as an architect in London. After many years practicing architecture he returned to his original love of painting although his paintings usually incorporate some architectural interest. This Parliament Square design is one of many London paintings looking at the colourful hustle and bustle set against the usually drab solidity of the buildings. 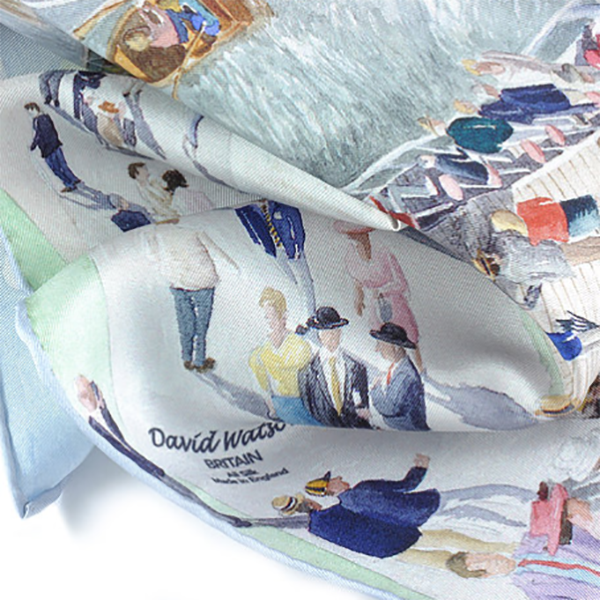 Claire Henley studied graphic design at college in London and then began work for a textile company. This image was painted after several happy holidays with her husband and two daughters spent in Salcombe sailing. Using an acrylic paint for versatility and strength of colour she creates a variety of textures bringing the harbour alive. 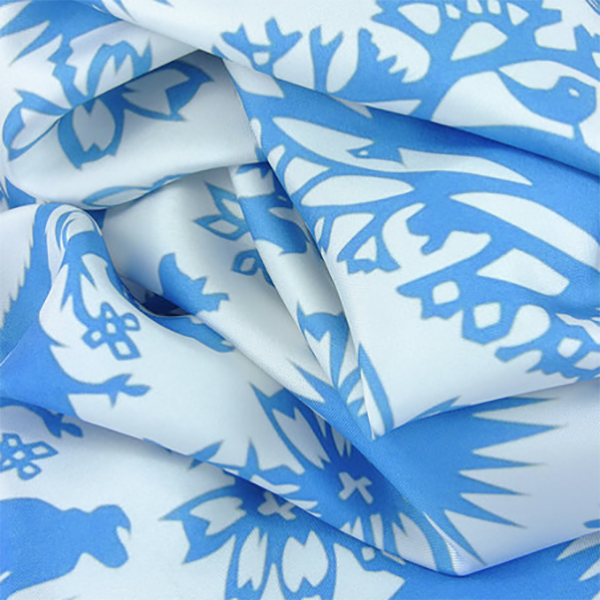 Anna Howarth recently discovered paper artwork and now creates magical pictures, expressing the simple reverie of childhood wondrousness created by precision cutting paper with a sharp blade. Her designs are enchanting with symbols and stories from the past, present and the future. She explores the visible and the invisible and the light and the shadow with the figures in her endearing landscapes. 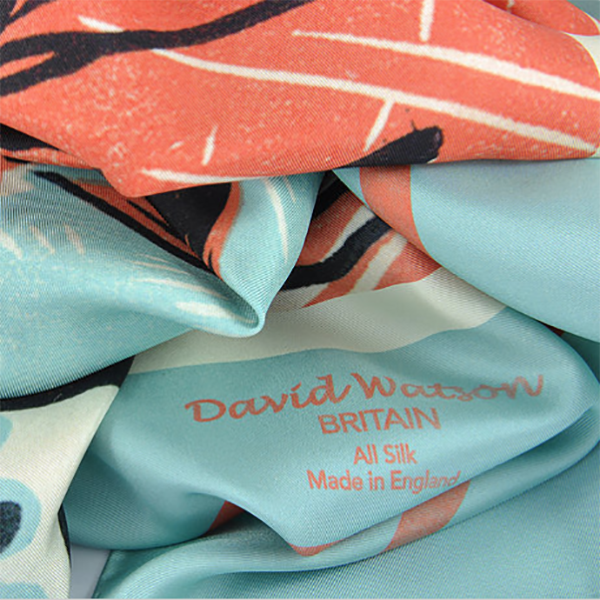 Celia Hart gathers ideas as she walks near her studio in southwest Suffolk, encounters with animals and birds in the fields and woods are worked into designs. The block carvings evolve from her sketches but retain their lively lines. After a career as a designer, art buyer and illustrator, she returned to her love of lino and woodcut prints. She is inspired by printmaking techniques from Japan and China and English illustrative print. 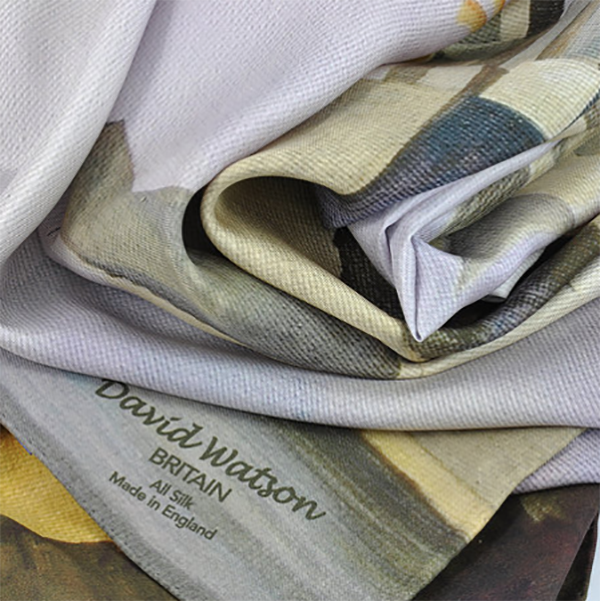 Gail Robertson is a self – taught painter living in Perthshire. She adds her own slant to a design while still keeping it recognisable.
Gail was inspired to paint the romantic Eilean Donan Castle by a visit en-route to the Isle of Skye. This shows the beginning of a beautiful day with the last of the mist rising off the sea lochs. The design soaks up the colours, light and mood.

You can find out more about David Watson here.