Make it British member Hotter Shoes have increased their sales to over the £100m mark after ‘re-focusing’ during the year. 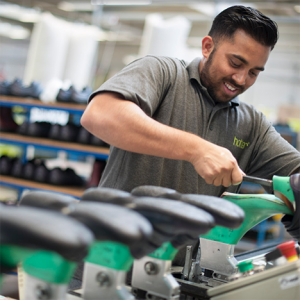 Hotter Shoes started out in 1959 as a slipper manufacturer. They now employ almost 1,000 staff with more than three million customers in the UK and overseas. Making Hotter the biggest shoe manufacturer in the UK.

They manufacture from their factory in Lancashire where they have invested millions of pounds to create one of the most advanced shoe making facilities in the world. Last year they made a staggering 2.2 million pairs of shoes.

“During the course of the year, the company continued to manufacture and merchandise a variety of footwear. It also “re-focused to deliver improvements in both profitability and cash generation” as part of efforts to aid future growth.

“The focus moved to manufacturing in-house, moving from paper to digital sales channels and effective cost management across the business.