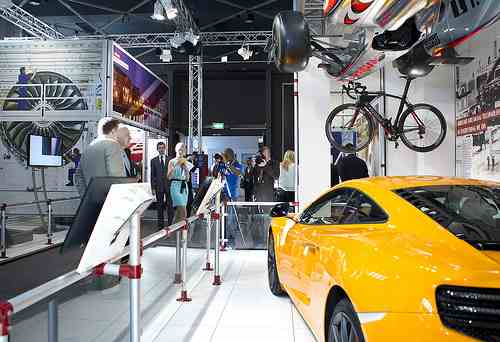 Make it in Great Britain launches at the Science Museum

The Make it in Great Britain exhibition went live at the Science Museum last week to coincide with the launch of the Olympics. The event is targeted at young people with the aim of showing them the rewarding career that they could have in manufacturing. Hence many of the products featured are based around fast moving vehicles that will appeal to young boys, such as Maclaren cars and Rolls Royce engines. However, anything that helps to raise the profile of British manufacturing is well worth supporting.

Also showcasing alongside the 39 businesses are the finalists of the Make it in Great Britain Challenge with their exciting innovations for the future, the winner of which will be voted for by the visitors to the exhibition.

The UK manufacturing industry generates £137bn each year for Great Britain and employs 2.5 million people – who ever said Britain doesn’t make anything anymore?

Entry to the exhibition is free, so please pop along and support it. It runs until the end of the Paralympic Games on the 9th September 2012.

Check out our Facebook page to see a video made for the launch of the exhibition.