Blackburn Yarn Dyers have been operating since 1915, proudly supplying weavers and knitters all across Britain. 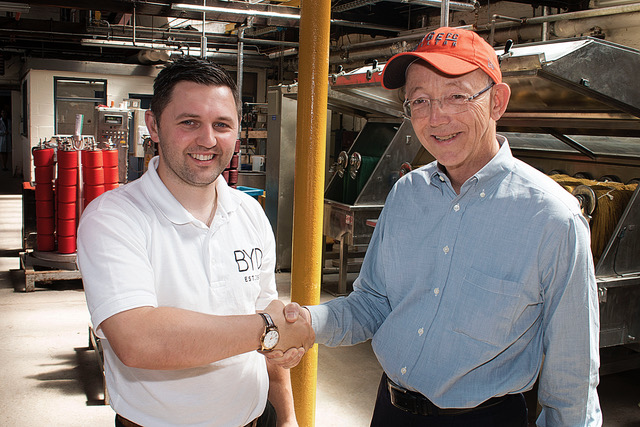 Blackburn Yarn Dyers have a long and proud history but it’s a modern company with its eye on the future. The company has recently received private backing to fund its continued expansion.

Blackburn Yarn Dyers will use the investment to continue to expand the high quality services the company already offers to leading UK textile manufacturers, while enabling growth into new markets.

Managing director Anthony Green said: “Very few century old firms are still prospering, and fewer still are attracting international investment due to their advanced British manufacturing excellence. We’re proud to be achieving both of these feats and more.

“New investment from a knowledgeable partner is providing us with some of the resources needed to build a thriving dye business right here in Blackburn.”

Bob Young, CEO of the company making the new investment in Blackburn Yarn Dyers Ltd, said: “As a customer of the dye house we have found it to be one of best suppliers of environmentally responsible natural fibres in the UK.

“Blackburn Yarn Dyers is very much positioned for the 21st Century, and what really attracted me and my company to this organisation was the fact that it uses cutting edge technology.

“There is no such thing as a non-tech industry anymore; Blackburn Yarn Dyers embrace of the latest technology makes the company highly relevant and that’s what made the business so appealing.”

“The opportunity to partner with the other shareholders of Blackburn Yarn Dyers to better serve our customers was a very easy decision to make and it’s a pleasure to be part of the community here in Blackburn.”

Green, who started his own career with the business as an apprentice some 18 years ago, is proud of the company’s progress since then.

He said: “Blackburn Yarn Dyers is already certified under the international ISO 9001 quality process standards and the new environmental excellence 14001 standards and we will continue to meet and exceed any future improvements in those standards as we prosper and grow.”

He added: “We are a fair Living Wage Foundation employer and an energy efficient manufacturer of natural fibres, which has attracted worldwide attention and enables us to help our partners in the British textile industry prosper, regardless of the political winds of the day.

Executive member for regeneration at Blackburn with Darwen Council, Cllr Phil Riley was delighted with the announcement which strengthens the mill’s position within the town.

“Making and manufacturing runs deep through our past, present and ambitious future and it’s something to be proud of. It’s great that Anthony, the team and their new investor see the very clear benefit of being based in Blackburn.

“We are really impressed with the entrepreneurial spirit and company’s values; they are a shining example of how businesses can play a powerful part in making our borough successful and give people opportunities.”