Jewellery design and manufacture in London

Made in London: Jewellery Now!

We look at the Museum of London exhibition ‘Made in London: Jewellery Now’, and the scene for jewellery design and manufacture in the capital 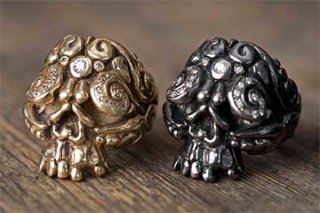 The UK jewellery industry is worth £1.2 billion, much of which is produced in the capital around the Hatton Garden area. The current Museum of London exhibition ‘Made in London: Jewellery Now’ celebrates jewellery makers working in the city today and features work by Husam el Odeh, Noemi Klein, Duffy, Rachel Boston, Imogen Belfield, Jordan Askill, and Frances Wadsworth-Jones.

To accompany the exhibition is a set of interviews held with the featured designers, which is well worth reading on the Museum of London website. They all work from East London in collaboration with the jewellers of Hatton Garden, the centre of the London jewellery market.

The importance of the city to the jewellers’ designs comes across in their discussions of influence. Husam el Odeh often takes inspiration in things he has found in the street, with a collection formed from casting roses from a bush outside his studio. Noemi Klein takes ideas from London’s geometric building structure, as well as from the yearning for the countryside that has come as a product of living in the capital. Perhaps the most interesting of the designers’ London based source material comes from the work of Frances Wadsworth-Jones, which is inspired by bird droppings on London’s pavement. 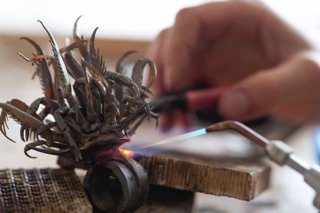 Noemi Klein working on a ring

The designers’ working location near Hatton Garden also has an effect on their craft, much of which has its routes in centuries old tradition, for instance, Rachel Boston uses lost-wax casting, a technique that can be traced back five thousand years.

While Duffy’s main skills lie in wax carving, there are many more skills necessary in the production of his work. He explains:

‘The different areas in jewellery are so skill-specific it would be impossible for me to be able to do everything, considering people can spend five years training to be a polisher. Stone setting’s a five year apprenticeship too. It goes on – enamelers, engravers, mounters, chasers. But I try to do as much as I can”.

Imogen Belfield focuses on the design of her products, outsourcing all manual skills including stone-setting, casting, polishing and plating, to Hatton Garden. The result is a combination of traditional craft techniques working alongside forward thinking designs. 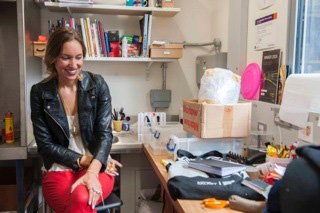 There are also many more jewellery designers working in London that are not included in the exhibition. This month, Creative Review magazine wrote an an article presenting some of the beautiful photographs of Julian Love’s Handmade London, a project ‘showcasing some of the capital’s expanding artisan scene’. One of the artisans featured on the Creative Review article is Jessica de Lotz, a bespoke London jewellery maker.

Jessica de Lotz’s designs are all made in her Clerkenwell studio, close to Hatton Garden. Jessica was highly commended for the ‘Jewellery Designer of the Year’ award at the UK Jewellery awards 2012. Most of the items available to buy on her website are around £100 – £400. She also works on private commissions. There is a good video showing her work here.

An alternative, hugely popular London jewellery design business is Tatty Devine, founded and run by Harriet Vine and Rosie Wolfenden. Tatty Devine sell more to the high street than to couture, with prices ranging from around £15 to £300, and are perhaps a more affordable and accessible London jewellery brand. Tatty Devine employ local people and hand-make all their designs, using the more modern and yet still craft based technique of laser cutting acrylic. Their micro manufacturing takes place in their London and Kent studios.  Their first collection was shot by Vogue, and the girls have each been awarded MBEs for their services to the fashion industry.

If you are interested in finding out more about the British jewellery industry the following links may be useful:

Made in London: Jewellery Now is being held at the Museum of London 21 November 2013 – 27 April 2014. For more details visit their website. 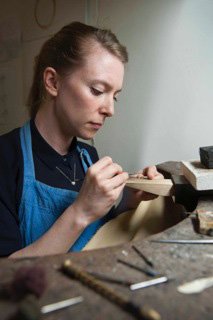