Made in Britain in the news this week 21st November 2011

Made in Britain from the web this week: Breanish Tweed | Private White V.C.| British Manufacturing 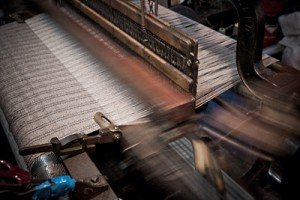 The men’s sartorial blog, Permanent Style, has developed it’s own tweed with the Scottish weavers Breanish. Made from Shetland wool, it will be available to order from December.  The article has some great photos of the manufacturing process too. (Breanish Tweed Loom Photo: Andy Barnham)

An interview with Cooper & Stollbrand’s James Eden, in which he reveals that some unscrupulous retailers are jumping on the Made in Britain bandwagon as a marketing ploy – manufacturing small runs in the UK and the bulk of their orders offshore. A similar discussion has been raging on the Made in the UK group on Linked In.

In the wake of the government’s launch of the Make it in Great Britain campaign, the Guardian ponders on why manufacturing has been lost in Britain.

What’s the future for manufacturing in the 21st century? (The Independent)

The article discusses the role of design in the manufacturing process, following a Battle of Ideas debate about the future of British manufacturing –  part of the V&A’s Power of Making exhibition.

Channel 4 News asks ‘What is still made in Britain?’

…and finds that a Union Jack sofa John Lewis is using to advertise it’s Made in the UK campaign is, in fact, made in China.