Made in Britain in the news this week 14th November 2011

Buy British: Why isn’t there a new campaign? (BBC News) 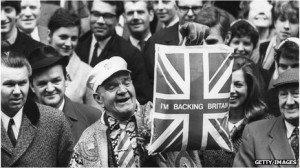 The ‘I’m backing Britain campaign from the ’60’s’

The BBC ran an article this week asking ‘why aren’t there more campaigns encouraging people to be patriotic and buy products made in the UK?’
The Express followed it up a couple of days later with a feature entitled ‘Let’s Buy British’. You may recognise one of the quotes in their article – it was taken from our exclusive interview with Deborah Meaden that we ran last week!

Lingerie Made in the UK (Lingerie Insight)

If you are interested in which lingerie brands are made in the UK and by whom, then this article is well worth a read.