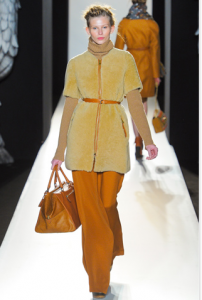 Mulberry has received £2.5m to build a handbag factory in Somerset

With London Fashion week having just opened this weekend, there has been a welcome focus on British manufacturing. The Independent featured coverage yesterday of a speech made by Sir Philip Green at a British Fashion Week event in which he called for the industry to support manufacturing in the UK. Sir Philip argues that by bolstering domestic manufacturing the fashion industry will create jobs for young people and help to reduce unemployment.  He hopes to replicate the success of the Fashion Retail Academy within the manufacturing sector.

A similar story was covered in the Guardian which claims that the fashion industry accounts for 1.7% of UK GDP and supports 816,000 jobs. The reason cited for the upswing in British manufacturing is the rising cost of producing in China and the importance of speed to market that domestic production permits. The Guardian also mentions the £2.5m given to Mulberry from the government’s regional growth fund to build a handbag factory in Somerset which will create 250 jobs. Ed Vaisey, the minister for culture and creative industries, said that  ‘the fact that Mulberry can access that money is a reflection of the fact that the government acknowledges the role of fashion in our economy.’

Meanwhile the Telegraph featured the headline ‘Why made in Britain is the most fashionable label this season’    and quotes Anya Hindmarch as saying that Made in Britain has cachet again. The designer, who manufactures very little in the UK these days, says that she ‘witnessed first-hand the decline of accessories manufacture in Britain’ but now sees that it is beginning to come back.
We think that perhaps if British factories had not been abandoned by brands looking to make increased profits with the promise of cheap offshore manufacturing a decade or so ago then the industry would not have declined in the first place, but that’s another story.

What is beneficial about the focus that these articles, and other high profile media campaigns such as the imminent programme from Mary Portas,  are bringing to British manufacturing is that they start to raise questions in the consumers’ minds about where there clothes are made. If they then realise that the purchasing decisions they make can impact on jobs in the UK, then this has all been worthwhile.