UK manufacturers have warned the fashion industry could face a “severe” shortage of skilled workers if a recommendation to restrict the migration of workers comes into force after Brexit. 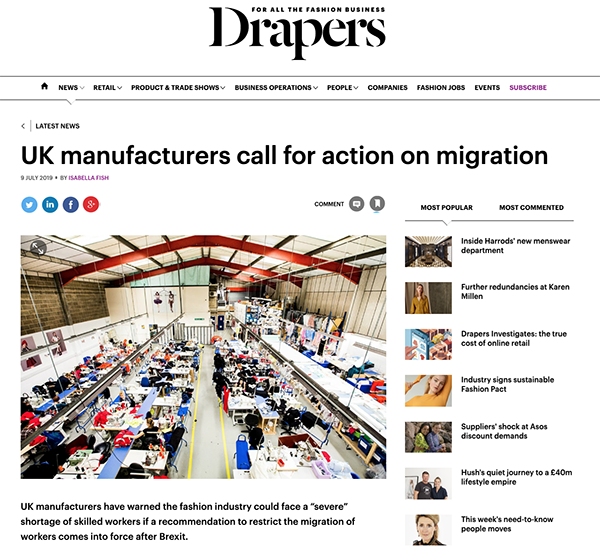 The below article was featured on drapersonline.com in July 2019, by Isabella Fish:

In September 2018, the government’s Migration Advisory Committee recommended folding European Union citizens in the UK into a modified version of the existing work visa system for non-EU migrants, which has a £30,000 minimum salary requirement, after Brexit.

However, skilled workers, such as production or sample machinists, typically earn below £30,000, and so would not be eligible for a Tier 2 visa.

The All Party Parliamentary Group (APPG) for Textiles and Fashion held a meeting at the Houses of Parliament on 8 July, to discuss with policy makers which visas the sector needs.

The committee advised the government to include skilled garment workers on the shortage occupation visa list; to lower the Tier 2 visa threshold to £21,000; and to ensure they are added to visa quotas when freedom of movement for EU nationals ends.

“We will now put the recommendations forward to the government through a petition letter and continue to work closely with all stakeholder parties involved,” Tamara Cincik, CEO and founder of Fashion Roundtable, the secretariat for the APPG said. “We aim to have resolution by 31 October [when the UK is due to leave the EU].”

Kate Hills, founder of manufacturing trade show Make it British, said: “Garment machinists are highly skilled workers, but the government considers them unskilled because of their salaries. It has no understanding of how much of an issue there is with supply and demand when it comes to UK garment manufacturing. There is a severe lack of skilled staff.”

Jenny Holloway, chief executive at London manufacturer Fashion Enter, agreed: “There is a lack of understanding from the government as to how skilled machinists are.

“What is the government doing to replace this loss if eastern Europeans have to leave the country? It has to do something because it is majorly stunting growth for the industry.”

James Eden, managing director of British-made premium menswear label Private White VC, said: “Around 70% to 80% of our staff are from the EU. We’re constantly looking to recruit skilled or non-skilled workers, and this recommendation will prevent new work, new youth and blood coming through. If labour dries up, it will have severe implications for lots of businesses.”

Simon Cotton, CEO of Johnstons of Elgin, said: “Our non-UK workers, around 150 people, are vital for the future of the business. I believe that most of our workers will be able to claim UK status, but if they have to leave the country, we won’t be able to operate at the current volume.

“The biggest concern for us is how we can get skilled labour in the future if we want to look at growth opportunities.”

The Migration Advisory Committee has been contacted for comment.