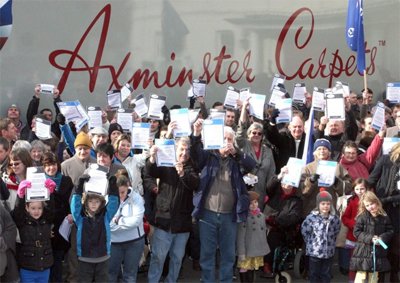 Local residents campaigned for Axminster Carpets to be saved

It was a sad day in March this year when it was announced that Axminster Carpets had fallen into administration with the loss of 300 jobs. So it was heart warming to hear that the Devon based company, which has made carpets for George III, the Royal Albert Hall and 10 Downing Street, has been saved from closure by a consortium of local business people.

Thousands of people backed a campaign to rescue the British heritage brand, which will now see its factory continue to run. The new company will be run by the grandson of Harry Dutfield, who restored the carpet making business in Axminster in the early 20th century after a fire had destroyed it.

Meanwhile, Brintons, which has carpet manufacturing plants in Telford and Kidderminster, has announced that it is introducing advanced weaving technology as part of a £3m investment in its UK operations. The 230-year old brand also recently made the decision to close its Chinese division in order to focus on its other manufacturing bases ( it still makes carpets in Portugal and India too).

Brintons currently employs 500 people in the UK and the latest investment will create jobs in both of its UK locations. They have also annnounced the launch of an apprenticeship programme that will see the company recruit 8 apprentices.