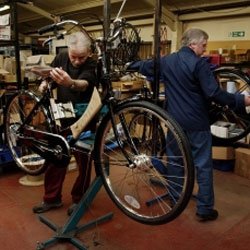 British bikes being made at Pashley

Following our article about British bikes made in England, we were very pleased to read that the Bicycle manufacturing industry in the UK is seeing a big upsurge in production.

British bicycle companies including Brompton, Pashley and Moulton are seeing an increased demand from countries such as China who want to buy bikes that are made on these shores. Pashley, who have been making their bikes in Britain since 1926, are firmly committed to manufacturing in the UK and would not make their products anywhere else. When we interviewed their MD Adrian Williams a while ago he made it clear that being made in Britain was an important part of what Pashley was all about, he told us –  “our customers value the bicycles we make and the fact that Pashley design and manufacture them, here in the Heart of England.”

British bikes still have a long way to go if they are to reach the 1.2 million that were made in Britain in 2000…

…let alone catch up to the 2.3 million that were made in Italy and Germany last year. In fact Britain is now only 19th in the bike production charts in Europe, a far cry from its global no.1 position in the mid-twentieth century when it was in its heyday. Let’s hope that the rise in demand for British made bikes continues until we are no.1 again.