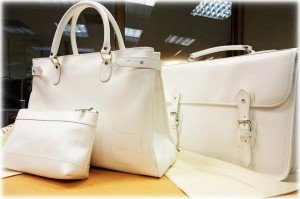 Earlier this week I put out a call on behalf of the government’s Make it in Great Britain campaign for more fashion and textile designers to put themselves forward to show the world what forward-thinking products they are capable of. And now here is a fine example of that innovation right on the catwalk at London Fashion Week, in the form of this phone-recharging tote from Tusting and Richard Nicoll (shown centre above).

Tusting is a family run company that has been in the business of leathergoods for over 130 years; one might say that they are somewhat traditional in the classic looking bags that they produce in their Buckinghamshire factory. Which is why it is all the more fantastic to hear that, together with Richard Nicoll and Vodafone, they have produced one of the most cutting-edge pieces of innovation that the British handbag industry has seen for years.

The clever gadgetry built into this very stylish and beautifully made bag magnetically charges a phone plugged into a pocket inside. It also contains a retractable cable so you can talk on it when it’s charging and even has a stylish charm that hangs on the outside of the bag which lights up to let you know you have a call. The only drawback is that every so often you have to remember to re-charge the bag itself by attaching a magnetic charger to the outside.

As someone who often finds herself out and about with a phone that has run out of juice, I can’t wait to get my hands on one of these when they come out later this year. Well done, Tusting. 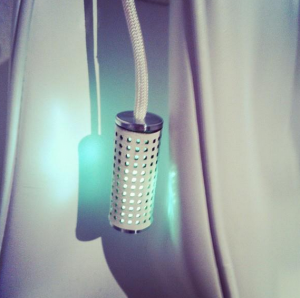 Illuminating charm on the Tusting tote