Royal Baby wait is over - but will the gifts be made in Britain? Skip to content

The Royal Baby wait is finally over – but will his gifts be made in Britain?

Possibly not, as experts predict that less than a quarter of commemorative Royal Baby Gifts will be made in the UK 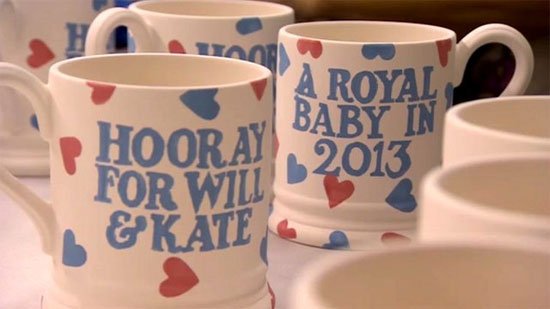 Since the announcement last December that the Duchess of Cambridge was expecting the future heir to the throne, the retail world has been rubbing its hands together with glee at the thought of all of the extra cash that will be winging its way into British tills to celebrate the event.

The potential market for Royal Baby memorabilia has been estimated at £80m, and will include the many tourists that will be in London this summer who are keen to snap up something to commemorate being here when the new arrival turned up.
In particular, Britain’s ceramics industry has been gearing up to this event for 7 months – Emma Bridgewater even managed to get a Royal Baby product on the shelves within 2 days of the announcement being made last year.

But whilst Emma’s commemorative Hooray for Will & Kate mug was entirely made in Britain, many of the other Royal Baby products coming out of Stoke-on-Trent won’t be entirely made here – they will have been fired abroad and simply had the decoration and final glazing  put on in the UK at the last minute, once the baby’s name is known.

It has been said that less than a quarter of the Royal baby souvenirs that will hit the shelves this week to commemorate the birth of the third in line to the throne, will actually be made in the UK. If the Coronation Festival was anything to go by, and the Queen buys her new grandson a present from one of her Royal Warrant holders, not even that can be guaranteed to be made in this country. 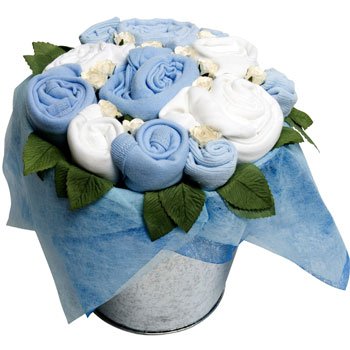 So now that he is finally here, what gift could one possible buy for a new baby boy that is made in Britain? Tania James Price, founder of The Flower Stork, thinks she has the perfect answer. She creates bouquets that on first glance look like they are made of fresh flowers, but on closer inspection reveal that they are made up of a British-made selection of baby blue bodysuits, bibs, blankets, socks and muslins – everything that a new baby might need to get him up and running. Handmade in the Flower Stork’s UK workshop using British-made garments,  Tania says that ‘new baby gifts don’t get much more British than this!”
Well, given that the vast majority of baby gifts out there are manufactured overseas, we tend to agree with her – we just hope that they wet the baby’s head with a nice bottle of English sparkling wine!