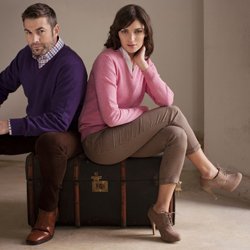 Wollen mills across Yorkshire, Lancashire and the Scottish Highlands contributed to sales of over £270m in 2012, a huge increase on the £180m in 2007. There are now 40 fully functioning mills in these areas, employing 5,000 workers. This is nothing like the industry was in its heyday, when Britain had more than 130 mills and a workforce of 50,000, but is nonetheless a great indicator that people are starting to value the quality of products that Britain can produce.

Companies like Hawick Knitwear, Fox Brothers and Dashing Tweeds have seen a particular increase in demand from overseas customers. More than 70% of the wool products made here are now shipped abroad as a growing  middle class in emerging markets actively looks for knitwear that has been made in Britain.

The growth of the wool industry is great news for the British economy, and its success is partly attributed to the Campaign for Wool which was launched by Prince Charles in 2010 to help revive the interest of consumers in our wool industry. Since the campaign began the price farmers receive for their wool has increased threefold, adding to the confidence about the future of the industry, and benefitting the UK wool industry as a whole.

For more information about the Campaign for Wool visit their website