Why we've changed the name of our event to Make it British Live!

In 2014 I set up a little trade show and conference called Meet the Manufacturer.

It came about because I saw a growing number of enquiries to the Make it British website from businesses looking to connect with UK fashion and textile manufacturers.

At the same time, the factories that I spoke to were still predominantly relying on word of mouth to find new customers.
I realised that the industry really needed a trade event to bring them all together – and Meet the Manufacturer was born!

The first event took place in a small warehouse of 11,000 sqft at The Old Truman Brewery in East London.

56 exhibitors from across the industry took stands at the first show, and a two day conference programme for 250 delegates ran alongside.

Less than 5 months in the planning (would have preferred long but that’s another story altogether!) and not having held an event before, I was unsure how many people would actually turn up…

But I needn’t have worried.

The conference was a sell-out, and there were queues around the block as over 2000 visitors waited to get into the trade show!

Now in its fifth year, the event is held in a warehouse unit of 55,000 sqft at The Old Truman Brewery, over the road from where the first event took place.

More than 5,000 visitors and 200 exhibitors are expected in 2018, showing the increasing demand for making in the UK and buying British products.

The show attracts overseas visitors from 17 different countries, including Japan, Germany and Scandinavia, who come to the event looking for authentic British-made products to stock in their stores.

Now that the show is about more than just meeting manufacturers the name didn’t seem quite so appropriate.
So I’ve taken the decision to rename the show to more accurately reflect our core values.

From now on the show will be called Make it British Live!

We pride ourselves on still being the ONLY 100% British sourcing event and I believe that our new name will connect the event even more closely with the other activities that we do at Make it British.

I’m confident that our rebrand will be the fanfare to attract even more progressive businesses looking to source locally and reshore their production back to the UK.

From garment manufacturing and textile mills to pattern cutters and trimming suppliers, Make it British Live! brings together all the UK manufacturers you need under one roof.

The event is also the place to go to discover a British brand, with a selection of creative businesses showcasing their distinct and inspirational labels.

Plus we will still have an packed two-day programme of talks with a line-up of inspiring speakers and informative workshops that reflect the diversity of the fashion, textiles and homeware industries.

More and more businesses in the UK are looking to manufacture locally and we’re seeing increased interest from overseas as more companies seek out brands with a made in Britain label.

For many years the fashion and textiles supply chain in this country has been fragmented, but Make it British Live! is all about bringing that supply chain back together!

Make it British Live! takes place on 23 and 24 May at The Old Truman Brewery, London.

For more information go to: makeitbritishlive.com 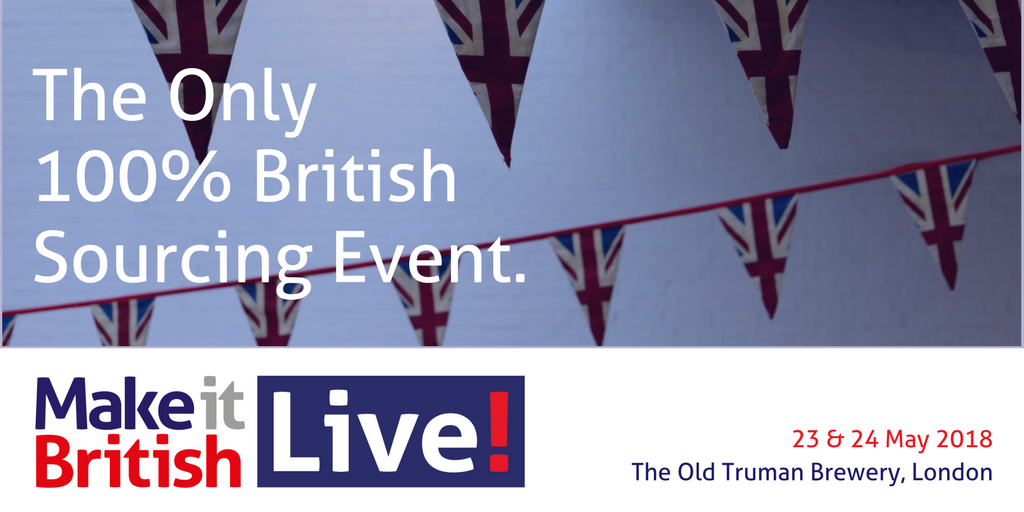