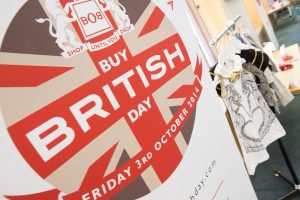 Buy British Day was launched at the House of Commons

Yesterday our friends at Best of Britannia officially launched ‘Buy British Day’, which will take place on Friday 3rd October 2014.

The launch of the event took place at the House of Commons, and was supported by some of Britain’s top manufacturers, including Brompton Bicycles, Mathmos lighting and Walsh footwear, and was hosted by Wayne Hemmingway MBE.

The aim of Buy British Day will be to encourage consumers to buy more British-made products, which is something we will wholeheartedly support here at Make it British, and hope that you will too.

So, mark 3rd October 2014 in your diary, and look out for more companies and retailers that will be supporting Buy British Day nearer the date.

Want to receive discounts on British-made products? Find out how to here