Easter Special: We discuss chocolate with Aneesh Popat, aka The Chocolatier - Make it British Skip to content

Easter Special: We discuss chocolate with Aneesh Popat, aka The Chocolatier

Aneesh Popat, aka The Chocolatier

With Easter just a few days away, we’ve got something for you other than the same boring old eggs! Instead we’ve intervewed Aneesh Popat, aka The Chocolatier, creator, designer and flavour master of some of the most amazing luxury British chocolates that you can buy – no wonder Michelin-starred restaurants are snapping them up.

When did you first become interested in chocolate making?

When I tasted an origin bar of chocolate. The wrapper told me that I ought to taste things like “black olive notes” and, to my surprise, I did! I was fascinated with how a plain bar of chocolate could taste so complex. I wanted to be involved with creating such chocolate myself – so I did!

What do you love about it so much?

How do you think your Indian and British roots have influenced the way that you make chocolate and the flavours you use?

I combine British flavours with spices to make them more seasoned and to lift them to create new experiences. In India everything is spiced, even freshly cut fruit. I have also done the reverse – I have taken experiences such as Indian street food and desserts and incorporated British fruits and then infused them into chocolate.

Tell me about your water ganache range of chocolates. How did you think up the revolutionary concept?

I am not the founder of water ganache, that was Herve This, a French Chemist but I have used the technique of mixing chocolate and water to allow the natural beauty of chocolate to really shine through. I use the best chocolate on the planet in my recipes and accent their notes with fruits and spices.

How do you try to keep production and the products used in making chocolate local for such a luxury and often exotic item?

Instead of using large chocolate makers’ produce, I am trying to support smaller independent chocolate makers such as Duffy’s. I grow the herbs that I use in the chocolate myself, and things like honey are also available locally, unless I am specifically trying to create an internationally-originated concept.

If there were no limits, what would you like to create with chocolate?

Water that tastes of chocolate, just as transparent and just as fluid. 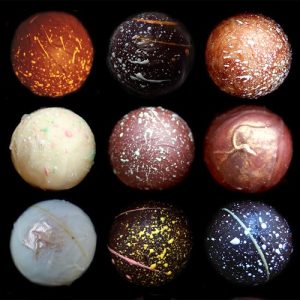