[youtube http://www.youtube.com/watch?v=5RHI9m59bWA]
When David Gibson gave up his job fixing printers in the City he never envisaged that he would go into the footwear trade. “We ended up in this business by accident. My wife wanted a place down here and when we found this 200 year old house, which had a workshop out the back making sheepskin products, the previous owners would only sell it to us if we agreed to take on the business”.

With no previous experience in the footwear trade, others might have thought him foolish to take on a business in an industry that in 1996 was declining rapidly and whose main customers were small independent shops that were also on the wane.

Years before, South West Somerset, where Sheepland is based, had a thriving footwear industry that in 1939 employed over 4,500 people*, but by the mid ’90s  many of the local footwear companies, such as Clarks in nearby Street, had opted for a cheaper manufacturing base overseas.

“For the first few years we struggled a bit as more and more of the shops that sold our slippers closed down”, says David, who recalls how he then looked for other ways to sell his products. “The internet came along and I thought ‘let’s get us on that’, and orders have increased year on year ever since.” 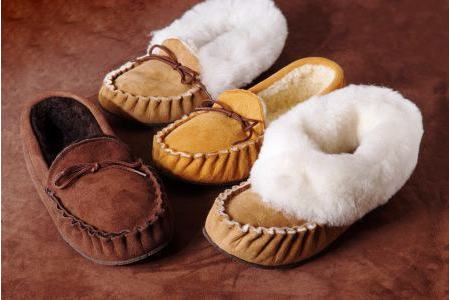 The Sheepland website now sells a vast range of sheepskin products, many of them made locally, but it is the manufacture of their traditional range of slippers that you can see in this video which is the backbone of their business. “People are really surprised that we actually still make them ourselves. They can ring up and ask for a certain style and I’ll say ‘we’ve just made some of those you can have them tomorrow'”.

Sheepland is very much a family business, with all of the Gibson family involved in it, but it is daughter Laura “who pretty much running the show these days” says David. It was Laura that made the great film that you can see above, showing the skill that is required to make Sheepland’s products. Katrina, the star of the video, has been making sheepskin slippers for over 30 years, and produces each pair in around 30 minutes.

When I asked David where he gets the sheepskin from to make the slippers he says that whilst currently skins are bought from a wholesaler in Northampton, he hopes to be able to source them locally again soon. This is because Devonia, the last British sheepskin tannery whose fate looked uncertain recently when its owners Axminster carpets went into administration, has recently been saved and looks set to remain in business. Great news for Sheepland, and even better news for British craftsmanship.

*Statistics from Census of Production Report 1939