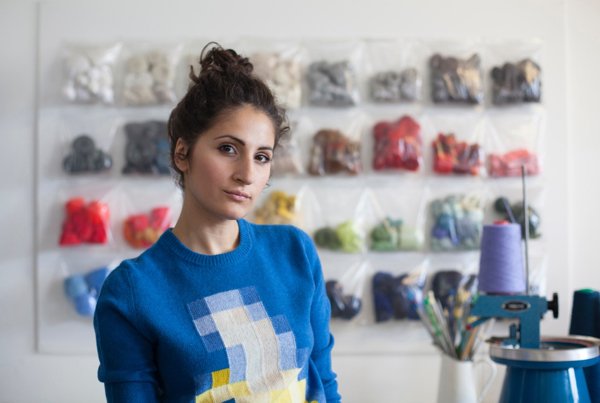 Aysen Bayram, founder of FANCLUB in her studio

It’s been a fantastic year for FANCLUB – Glamour magazine called them ‘one of the coolest knitwear labels to know’ and their Kimye sweater containing a mash up of celebrity couple Kim Kardashian and Kanye West’s faces took Christmas jumpers by storm.

We caught up with Aysen Bayram, the maker behind the label, to find out a bit more about what drives her brand.

Can you tell us a little about your background and what experience you had in knitwear before launching FANCLUB?

I call myself a 3rd generation maker. My grandmother and aunts were seamstresses on (aptly named) Fashion Street off Brick Lane and my parents used to own a factory in East London in the early 80’s. They manufactured for Topshop, Dorothy Perkins and other high street brands but were forced to close when retailers began taking their manufacturing off-shore. My mother was a professional dressmaker and I grew up watching her pattern cut and sew, it clearly rubbed off on me as I started making my own clothes at age 12.

I studied BA Fashion with Textiles Design at Ravensbourne, graduating in 2003. Post-graduation I worked for Ally Capellino as Design Assistant. I quickly became Production Manager working with mainly British suppliers and manufacturers and it was there I learnt about the production process. I relocated to Amsterdam to work for Tommy Hilfiger and rekindled my love of knitwear as Menswear Knitwear Designer. In 2010 I moved back to London, resurrected my knitting machines and set up Knitster LDN, a knit design and consultancy studio before setting up FANCLUB.

Why did you decide to set up Fan Club and where did you get the idea for the name from?

FANCLUB was the natural evolution of a personal project I was working on; I was creating knitted animal portraits and a jumper seemed to be the next step. It was definitely something that was on the cards for me, especially seeing the effect the decline of British manufacturing had on the family business. The name comes from a scene in a ‘gentleman’s nightclub’ from the film Buffalo 66. 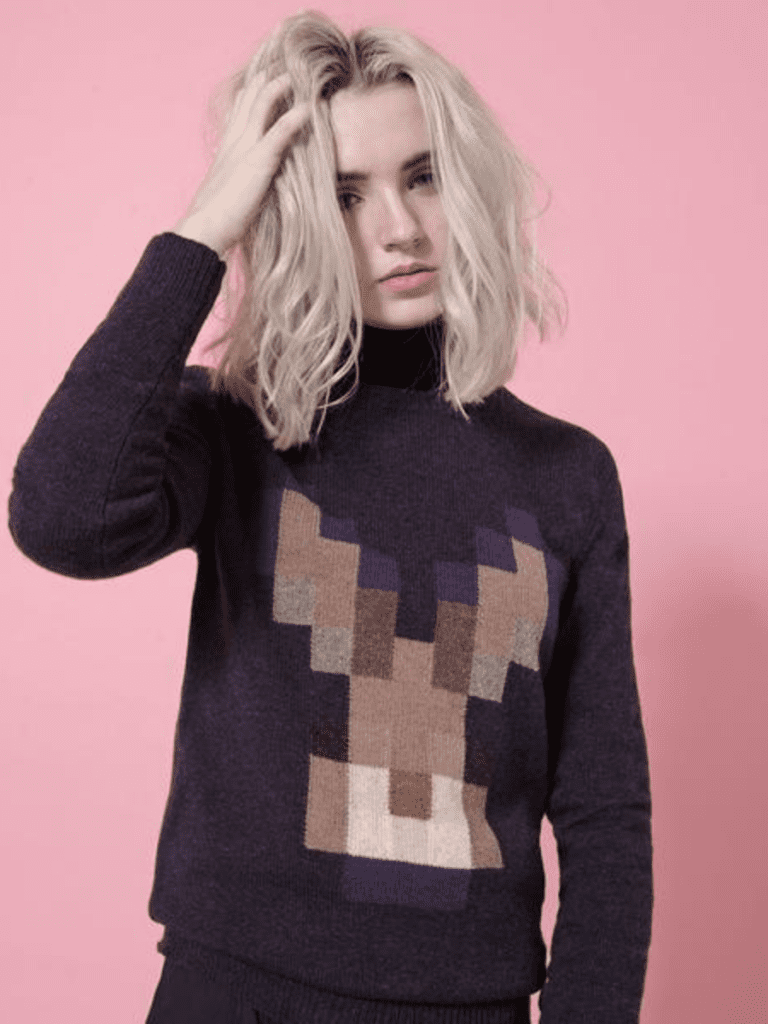 Where do you get the inspiration from for your designs?

It comes from so many places, mostly mundane things – like the distorted reflection of colour in a silver balloon. My iPhone is full of random images which piece themselves together as the collection evolves. Trial and error is also one, there are so many trials when developing knit swatches that the mistakes tend to spark new ideas. The problem is trying to re-create those mistakes.

Your sweaters are not only knitted in the UK but they are made using British yarns too. What extra value do you think this gives your customers?

I like to call it ‘double provenance’. Consumer awareness within the fashion industry is growing (especially with the collapse of Rana Plaza) – whether that concerns working conditions or sustainability, customers want to know the history of that product.

In my opinion, the origin of the material/yarn is of equal importance as to where the end product is made. British mills are an important part of our industry and the manufacturer has just as equal a responsibility to support these businesses as the consumer does to the retailer.

All our yarn suppliers have been running since the 1800’s, with one J.C Rennie, dating as far back as the beginning of the Industrial Revolution. And Z. Hinchliffe & Sons are a 6th generation family-run business. It’s such a big part of our British heritage, it would be far too sad to lose these. 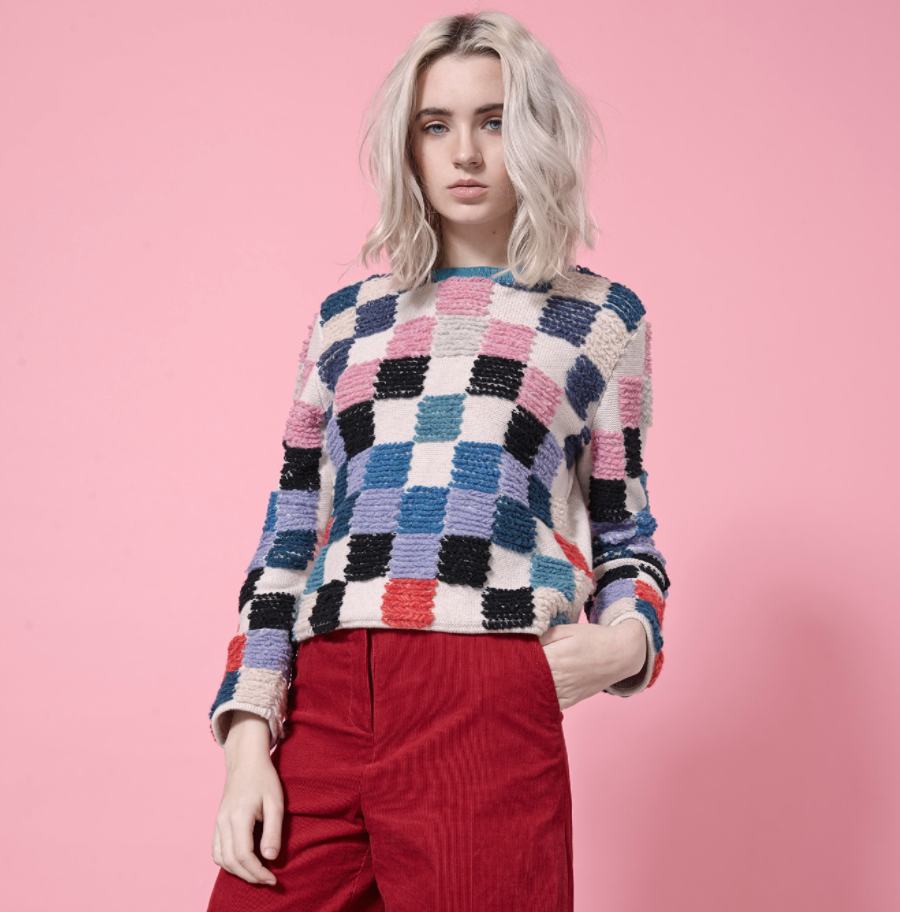 Many of your sweaters use a technique called hand-laid intarsia, can you explain what this to those that might not be know?

Intarsia is a technique used when knitting multiple colours. It differs to other knit techniques such as Fair Isle as there are no floats (or strands) carried at the back of the knitting so the result is a finer fabric.
In hand-laid intarsia the knitter works from a grid which maps out the artwork stitch for stitch. For each block of colour the yarn is laid over the desired number of needles, this can be up to any number per row, we have 10 colours per row on our Banana Pixel Sweater. Once the row is complete the carriage is pulled across the needle bed and the stitches are knitted in. This is then repeated on every row – it’s a lengthy process, especially as some jumpers can have anything up to 400 rows.

What has been the most challenging thing so far with launching the brand?

Definitely sourcing factories who can meet low minimums. We’ve been lucky enough to work with Xpose in Manchester who were willing to lower their minimums in order help support our growth. 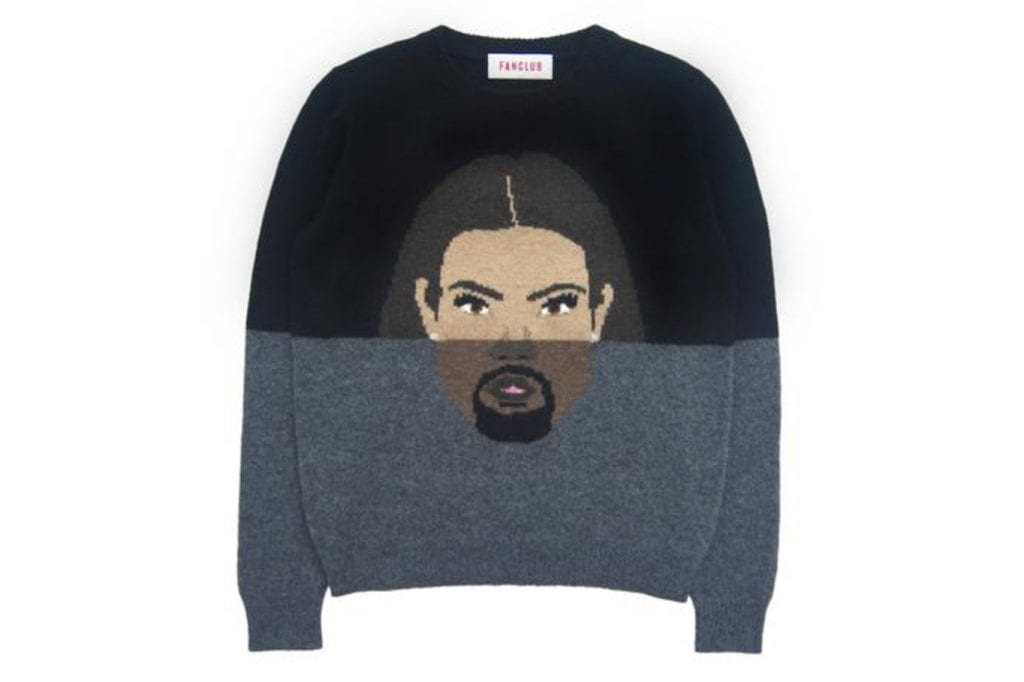 Can you tell me what ‘made in Britain’ means to you?

‘Made in Britain’ is about the heritage of skill and craftsmanship along with sustaining manufacturing within the British Isle.

British personality (alive or dead) that you would most like to meet?
David Bowie

Most-loved place in the UK?
The Peak District. Simply breathtaking.

British drink that you most enjoy?
You can’t beat a good old cup of tea!

Most inspiring British maker or manufacturer?
The Albion Knitting Company are doing some very exciting things with bringing back knitwear manufacturing to London at the moment.

J.C. Rennie, The Albion Knitting Company and Xpose are amongst the manufacturers exhibiting at this year’s Meet the Manufacturer event. If you’re looking set up your own knitwear brand why not come along and meet them?

You can find FANCLUB and buy their knitwear here.