A visit to Royal Stafford Pottery

We took a trip to Stoke-on-Trent to meet Norman Tempest, MD of Royal Stafford and backer of British design 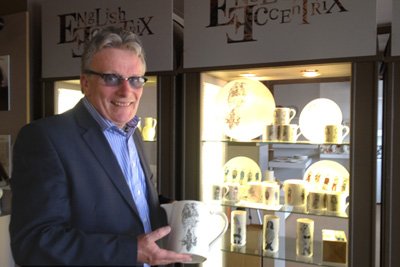 A while I go I praised Norman Tempest, MD of Stoke pottery company Royal Stafford, for winning an award for his support of British design. So I was delighted to be invited up to Stoke on Trent to meet Norman and to discuss his reasons for backing relatively unknown designers, as well as to hear his thoughts about British manufacturing. I took my eight year old daughter along with me too, determined that she should experience at a young age what it takes to get things made, and here’s how we got on…

Royal Stafford is based at the Overhouse Manufactory in Burslem, Staffordshire, a site which has been used for pottery manufacturing since the late 1700s. Entering the building through an unassuming door into a café, which also houses a factory shop, we were greeted by Graham Bowen, head of Operations, and as it happens, also Norman’s son-in-law. My daughter Flossie was invited to stay in the café and paint some pottery that would later be fired in Royal Stafford’s very own kilns, whilst I was shown around the pottery by Norman and John Nixon, Royal Stafford’s general manager, who has been with the company for 35 years.

I’ve been to many factories before, but this was my first visit to a pottery, and both Norman and John very patiently answered all of my questions about the processes involved in making their high-fired earthenware. What struck me first was how white the whole place was, the consequence of a fine layer of pale dust produced during the manufacturing process settling on every surface.

Talking to the guys as we walked round, it became clear that making pottery is much like most other factory work – the skill involved takes years to learn and many of the jobs are extremely specialist. I ask Norman if he has difficulty employing and retaining people in these specialist roles, and he tells me that it is a particular issue to keep women in the factory, as many of them move into clothing manufacturing where the work is marginally better paid.

Another of the challenges facing Norman Tempest, or anyone running a pottery in the UK, is the cost of fuel used to keep the kilns burning. It is not unheard of for Royal Stafford’s energy bills to run into a 4 figure sum every week, an overhead that could cripple a business that is trying to remain competitive in International markets. It was this that recently led to British ceramics firms being made exempt from the carbon emissions tax – something that came about thanks to lobbying by local Stoke MP, Tristram Hunt. 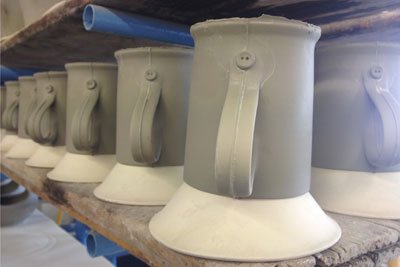 The International market is where Royal Stafford really excels – 50% of the output from its Stoke factory is sent overseas. “I think that exporting is important to any business,” says Norman. “Our pottery is particularly popular in American, Japan and Korea”. The renowned ‘Made in Stoke’ backstamp, which recently caused controversy when it was revealed in parliament that other, less scrupulous businesses were exploiting its marketing value, is something that Norman is keen to uphold. I ask him what he thinks about those British ceramics firms that are stamping ‘Made in England’ on the bottom of their wares when they are not adhering to the rule of conducting the first firing in the UK*,  Norman is clearly unimpressed. “If someone sets out to mislead the customer by stamping their company name and the word England on the bottom (when it is not entirely made here), then I think that it is morally wrong. Wherever potters go in the world they pick up a product and look at the bottom. We know who’s doing it”.

I ask Norman whether he thinks that the fact that Royal Stafford continues to manufacture in Britain is something that his customers appreciate, and he tells me that whilst being important, it is the company’s design that is their main selling feature – “I read the feedback (about our pottery) on the retailer’s websites, and most of them start off by saying that they love the design and the quality…and then they add ‘great, it’s made in England too’”. 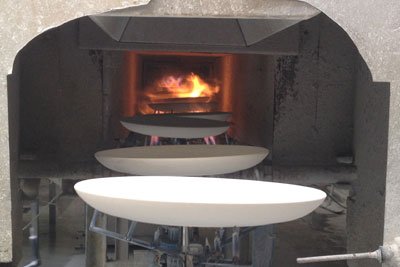 After our walk round the pottery Norman takes me to the showroom that houses some of the great designs within the Royal Stafford collection, including the pieces by young British designers, such as Carly Dodsley and  under the English Eccentrix umbrella. Unique to British pottery, the English Eccentrix collection is made by Royal Stafford, but allows the designers to sell their products under their own names. The idea was conceived by Mr Tempest in 2011 “to give designers credit in an industry where no one was given credit”, and it was this fostering of up-and-coming ceramicists that won him his recent Backer of British Design award. Royal Stafford is able to offer the English Eccentrix designers not only a way of manufacturing their ceramics, but also a foot in the door with International buyers. This sort of collaboration between manufacturer and designer helps both parties – Royal Stafford are able to appeal to a wider audience than with their core range, and the designers get someone to make their products in the small runs that they need to get started, as well as help with sales and marketing. 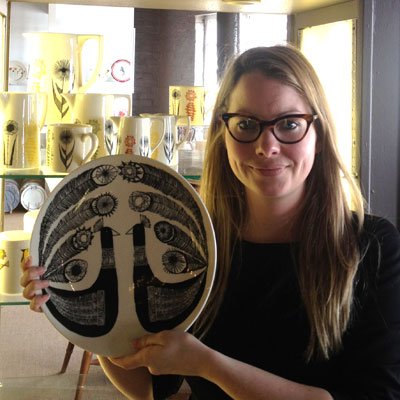 Carly Dodsley, one of the English Eccentrix designers

After a thoroughly enjoyable two hours spent at the Overhouse Manufactory it is time to leave, but I have to prize my daughter away from her pottery painting – maybe one day she will become one of the new English Eccentrix designers!

We would like to thank Norman Tempest and his team for giving us the opportunity to see inside their wonderful factory, and a special mention should also go to the highly organised Kerryanne Clancy of Plink Fizz, Royal Stafford’s PR company, for arranging our visit.