'Studies in Industrial Organization'- a fascinating look into post-war manufacturing

A study into the state of UK garment & textile manufacturing in 1946 foretold of its decline. 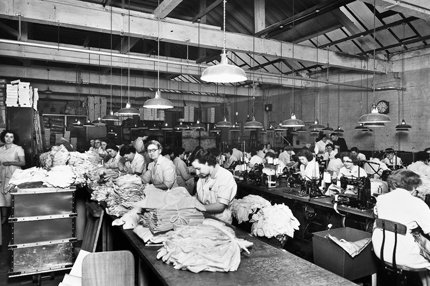 Those that read this blog regularly will know that I like to remind people of the fantastic heritage of manufacturing that we have in the UK – after all, the Industrial Revolution did start in Great Britain. So I was very excited to come across a book published in 1946 called ‘Studies in Industrial Organization‘ by H.A. Silverman, which summarises the situation in the clothing and textile industries in Britain after World War II.

Based on data from the Social Reconstruction Survey, which was carried out between 1941 and 1944, the book studies the position and prospects of eight different industries, including the footwear, hat and carpet sectors, for which Britain had been a formidable production source prior to the Second World War. Many of these industries were made up of thousands of small family run factories concentrated in groups around certain towns and areas, and the author notes that “many of the factories in 1939 were conducted in a manner and on a scale more appropriate to the 19th than the 20th century”. Silverman warned that if Britain was to maintain its economic position, advances needed to be made, not only in the techniques used for production, but also in the balance of foreign trade – overseas competition and cheap foreign imports were already threatening to overtake the value of exports from war stricken Britain. 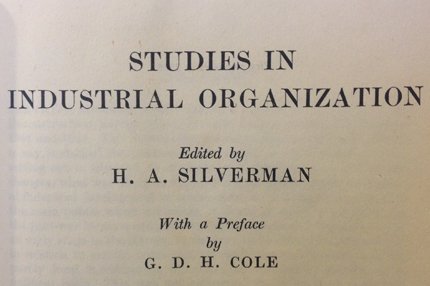 Studies in Industrial Organization published in 1946

Studies in Industrial Organization makes for interesting, if a little depressing, reading – not least because so many of the issues facing UK manufacturing nearly 70 years ago are still in evidence today; an industry that had wound down to due lack of demand, problems of skills shortages and training, fractured infrastructure and failure to keep apace with technology, are all things that are still barriers to the successful re invigoration of a once powerful industrial heritage.

Even in 1946 the author was predicting that the dominance of the chain store in post war Britain, selling products to consumers at a significantly higher price than they cost when they left the factory floor, would give rise to poor quality foreign imports. He noted that many UK manufacturers turned to branding their products in an attempt to charge a higher price for them, but questioned whether the public, despite the assurance of quality carried by a branded name, received the full benefit commensurate with the enormous cost of advertising – and how true this still is!

Mr Silverman’s predictions nearly 70 years ago, of rising exports, skills shortages and a British Isles dominated by chain stores, should have raised alarm bells, but sadly it has taken many years for people to realise that we need to preserve what manufacturing industry we have left in the UK.

If there is one lesson that we can take from this it is that in order to support British manufacturing it has to be to seek out products made in Great Britain and try and buy them directly from the business that is making them wherever possible – which is why we set up the Make it British Directory, to help you find those companies that make their products in the UK.