Fake it British - Cashing in on 2012 with the Union Jack

How everybody is using the Union Jack to sell their product this year, whether it is made in Britain or not 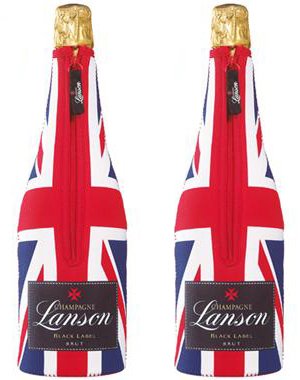 Champagne passing itself off as British

Regular readers of this website, as well as those that follow me on Twitter, will know that one of my biggest bug bears is products with Union Jacks on that aren’t actually made in Britain. And when this is also combined with a great big sign proclaiming ‘Buy British’ it drives me nuts.  The Jubilee celebrations this week, as well as the Olympics in London next month, has created a Union Jack frenzy to the point where there is not a single product you can’t buy without our distinctive red, white and blue flag emblazoned upon it. Aisle upon aisle in ever supermarket in the land is adorned with red, white and blue products in the hope that the increased support for British-ness will translate into a boost in sales of their (mainly foreign-made) goods.

Everyone is at it – Selfridges have their Great British Shop, containing a Le Creuset ‘Britain Celebrates’ mug made in France, and John Lewis have a Celebrate Britain collection that includes a Union Jack umbrella made in China (although in all fairness to JL they do also have a Made in the UK section on their website). Even that once very British of institutions, Marks and Spencer, has resorted to a plethora of Chinese-made tat emblazoned with our noble flag – this bra being the most offending item I have seen so far. But on the flip-side M&S do also have these Made in Britain tights which are, heaven help us, actually Made in Britain! 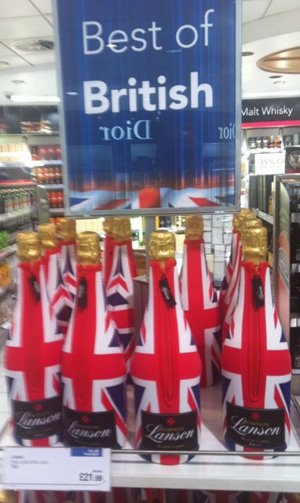 I was particularly heartened to hear that I was not the only one offended by all of these ‘Fake it British’ shenanigans. When  Bob Lindo of Camel Valley, makers of English sparkling wine, spotted this display at Gatwick airport by French champagne brand Lanson, with a Union Jack sleeve and a sign above saying Buy British, he was hopping mad. “I don’t believe that wrapping a French wine in a Union Jack is remotely acceptable” said Bob, “after years of crucifying even Elderflower ‘Champagne’ producers, for them now to do this is hypocritical to say the least”. He went on to stage a sit in at the airport until the offending sign was taken down and has since launched an official complaint with the  UK Trading Standards Department and is awaiting the outcome. Good on you Bob, if only there were more people like you willing to stand up to the faux-British products that we are being bombarded with this year.

If you have other great examples of Fake it British we’d love to hear about them. Please leave a comment below or post a message at www.Facebook.com/MakeitBritish